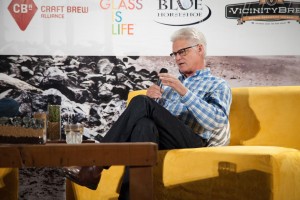 “I was a little bit a part of the problem to keep going and growing,” he admitted.

To alleviate the issue, he took drastic measures and made the “very emotional” decision to develop an exit strategy. There were a number of options on the table, but ultimately, in October of last year, McDonald sold the business to Belgian brewer Duvel Moortgat.

Just over a year removed now from the deal, McDonald opened up regarding the ins and outs of the acquisition, as well as the things that concerned him before signing on the dotted line, creating a list of considerations for brewers that may find themselves in similar positions in the process.

Before going with Duvel, though, there were a number of other different directions the company could have gone, from ESOPs, to family offices, to partnering with MillerCoors, all of which, inevitably, fell through for a plethora of reasons.

With MillerCoors, McDonald said, it just wasn’t the right fit.

“It’s an option for some people. It just didn’t seem quite right to me,” he said.

While he kept his cards somewhat close to his chest here, he did elaborate a bit on one marked difference between a Duvel and MillerCoors, both global beer companies.

“Duvel is not a huge brewery. They were 700,000 barrels pre-Boulevard. They’re a big brewery, but they’re not a ridiculously big brewery,” he said. “They have a lot of layers that we didn’t have but at the same time, it’s not Anheuser-Busch or MillerCoors either. Very different.”

As for some sort of employee stock ownership program (ESOP), it was a consideration, but the company’s chief financial officer wasn’t a “big fan” of the idea, so they were unable to push it much further than the consideration phase.

That left a family office partnership as the most likely deal – McDonald said if the Duvel deal hadn’t worked out, the company would have likely gone this route.

“We talked to quite a few of them,” he said. “There was one in particular that was very interested.”

The problem with that route, according to McDonald, is that family offices have a penchant for selling after a certain amount of time, which is something he didn’t want to happen.

“I think eventually they will sell, just like private equity,” he said. “Ultimately, it may be longer and it may turn out that it’s so profitable that they keep it, but at the same time, there’s always that possibility.”

So, as the history books note, it was Duvel that ended up with Boulevard.

Duvel, which has been around since 1871, was one of McDonald’s favorite breweries before even founding Boulevard, though that wasn’t enough to shake his jitters.

“Once you start going down the path and, you know, the general terms are agreeable to both sides and you start working on the little issues and you get the lawyers involved, it can get pretty frightening,” he said. “At one point, you kind of forget you’re not really talking to Michel (Moortgat, CEO of Duvel Moortgat) or Simon (Thorpe, president of Duvel USA) directly. It’s all these consultants and you’re like, ‘Oh my gosh, this is crazy.’”

The process was so crazy, in fact, it made McDonald second-guess his decision.

So, impulsively, he booked a flight to Belgium to meet face to face with Duvel’s executive leadership team and “hammered out a lot of really important details.”

Having accomplished that, McDonald was put at ease and the deal proceeded. But the transition of ownership process brought with it its own snags.

“Very few people really love change. They kind of like routine,” said McDonald. “Doing something like this is a lot about change.”

But they seem to be in the swing of things now, which McDonald said should help position the company to better handle obstacles of the future.