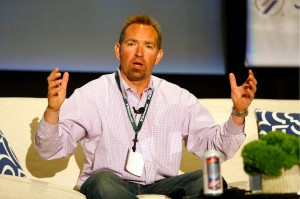 There isn’t any one way to move product in the craft beer market as it becomes increasingly saturated. At today’s Brewbound Session business conference in Boston, however, a number of industry experts divulged what has enabled them to grow sales of their brands as the popularity of craft has blown up around them.

For some of the most recognizable beer brands in the space, creating an emotional connection with the consumer has been key. To make that connection to the customers – be they beer drinkers or a brewery’s distribution and retail partners – the message and purpose of the company needs to be known and reverberated in-house as well.

The day’s first speaker, Mark Hellendrung, CEO of Narragansett Beer, broke down how to build that emotional connection in four steps, as follows: Understand your brand; find your differentiating idea; develop and demonstrate your credentials; communicate your difference.

He said these steps are paramount because no longer is exceptional beer alone a differentiator in the market.

“Great beer is not a differentiating idea,” said Hellendrung. “We could all drink six beers a day every day for the next year and we will not have exhausted the choices that are out there for us.”

He said instead the brand itself must reflect what the company stands for. That idea resonates especially in the company’s recently released Del’s Shandy, a collaborative summer release with the iconic New England frozen lemonade brand, Del’s. The brand, which has been flying off the shelves, according to Hellendrung, does so because it taps into the consumer’s nostalgia by combining two well-known and historic beverage institutions.

“The brand’s got to have a soul that continually anchors what we do,” he added.

That soul, he said, will build credentials that serve to distinguish the brands in the marketplace. But one distinction must be made, he said: credentials are not the same as claims.

He said Narragansett brewer Sean Larkin could brew up a renowned IPA, or Trappist style ale with the best of them, but the company isn’t sure how the styles would jibe with the company’s aforementioned “soul,” – the way a Del’s Shandy does, for instance – so they opt not to.

If Narragansett were to try to sell a Trappist style ale next to those carefully-crafted ales made by, say, Massachusetts’ own Spencer Brewery, he said, it would be no contest. Spencer would win every time, he said.

Those are the credentials. And in a highly entrepreneurial field like craft brewing, the entire organization has to be on board. 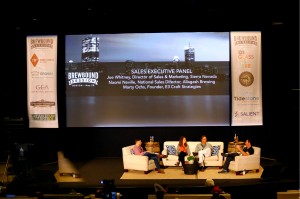 Naomi Neville, national sales director for Allagash Brewing Co., emphasized the importance of the message being relayed throughout the company, hiring only people who share the same core values that the company embodies.

Marty Ochs, founder of E3 Craft Strategies, a growth planning company for craft brewers, reiterated the importance of knowing one’s purpose and mission in order to not only stand out, but also survive in the market place.

“The purpose of the company, you have to understand – why do you exist?” he said. “It doesn’t have to be the catchiest thing, but something everybody in your company works behind.”

Ochs added that relaying that message to partners in the distribution and retail tiers, on down to the consumer, is also imperative. Hitting singles is the key early, he said.

“Don’t go for the moon,” Ochs said. “Make very small programs that can get very small simple returns at first.”

But it all goes back to the idea that there is more to success than simply producing good beer.

“If you’re not putting in the time on the business side, your expectations are not going to be met. Period,” added Ochs. “You need a yin and a yang.”