Pucker Up! We have a sour treat in store for you. At MobCraft we’re passionate about wild and sour beers and we are not alone. We have gathered breweries from across the state of Wisconsin to show off their sour skills!

Join us in the brewery Saturday, March 30 to taste from a selection of 40+ Wisconsin sours. There will be free admission with the option to purchase sampling tickets.

The event will feature a tap takeover in the taproom with 25 beers from MobCraft’s own Wild & Sour Program OR venture into the brewery where you will have the opportunity to sample sours from 11+ Wisconsin breweries (sampling tickets available for purchase the day of the event). There will be bottles available for purchase so you can take your favorites home. If you opt for VIP (sold out) you will receive early access and unlimited tastings of sour beers from across the state in the brewery (not redeemable in taproom) as well as, a commemorative tasting glass, and a behind-the-scenes look at our Wild & Sour Program with brewer and program director, Adam Thomas.

MobCraft will be releasing the 2019 vintage of “The Golden Series” featuring bottles of Sour Golden Ale, Sour Cranberry Golden Ale and two limited edition dry hopped varieties in cans. As well as bottles of our barrel fermented Brett Golden Ale.

Ticketing Details:
Free admission to the taproom with option to purchase full pours of MobCraft’s Wild & Sour beers.
Brewery General Admission – Available for purchase day of – Sampling tickets will be available for purchase the day of the event to sample sours from 11+ Wisconsin breweries in MobCraft’s brewery space. $10 minimum to enter the brewery gets you 5 sampling tickets and a commemorative glass with the option to purchase additional tickets at $2/ticket. 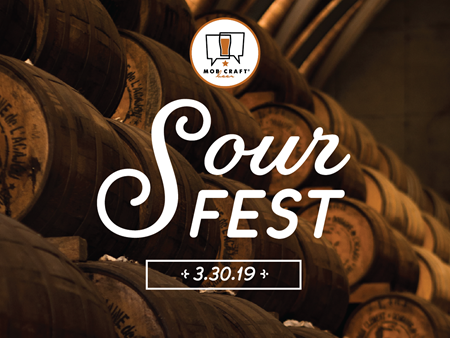 Ticket Price/Policy:
FREE Admission
This is a 2-part event. Taproom: Free admission to the sour tap takeover. In the brewery: $10 minimum gets you entry to the brewery along with 5 pours & a Sour Fest tasting glass. You may purchase more tickets for more pours: 1 ticket gets you a half pour, 2 will get you a full pour at $2/ticket.