In celebration of their Cosmic Collaboration Juicy IPA, join the breweries for a beer dinner!

In celebration of their Cosmic Collaboration Juicy IPA, join Ecliptic Brewing Brewmaster, John Harris, and Bell's Brewery Director of Operations, John Mallett, for a Cosmic Beer Dinner! The dinner will feature a menu from Ecliptic Brewing Chef Michael Molitor, each course paired with delicious beers from both of the breweries. The ticket price includes four courses (first course is a shared appetizer), six 5oz beers and one 16oz beer, gratuity, and a 500ml bottle to-go of the Cosmic Collaboration signed by both breweries!

This is the fourth of five releases in Ecliptic Brewing's "5 Years/ 5 Beers" Cosmic Collaboration Series.

To celebrate their fifth year of passage through this awesome star system we call home, Ecliptic Brewing is teaming up with five esteemed breweries to brew five beers of cosmic significance. Space can feel a bit lonely, so here's to making the journey with friends! 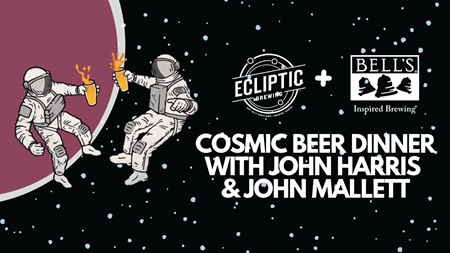