Make out like a bandit with a fresh-off-the-farm 6pk of Citra Slicker at our re-release party.

It's back, BABY. The freshest of the fresh Wet Hop IPAs this side of the Mississippi. Make out like a bandit with a fresh-off-the-farm 6pk of Citra Slicker at our re-release party.

Each hop harvest, the big city brewers from Cloudburst Brewing make the trek from downtown Seattle over the Cascades to team up with the farm brewers from Bale Breaker to brew Citra® Slicker Wet Hop IPA, a fresh hop beer that was first brewed in 2014 with then-owner of Elysian Brewing, Dick Cantwell. While it takes the Cloudburst team over two hours to get to Bale Breaker, the hundreds of pounds of wet Citra® hops picked fresh from the fields travel just four minutes from farm to kettle. Heavily dry-hopped, while light in color and body, this beer is all about these fresh, farm-grown hops! 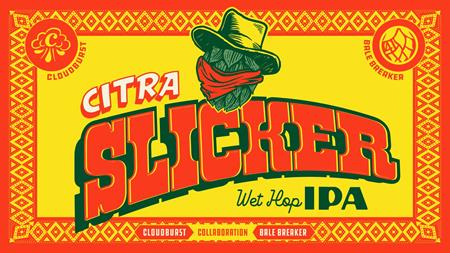