Did you know that Prohibition began four years earlier in Colorado than in the rest of the country? Want to know about why the mob and the KKK were connected to banning beer?

Each attendee receives a mug of 1916, our Colorado Lager based on a pre-prohibiton Colorado beer recipe. The base is a Dortmund beer and the use of 2-row barley and flaked corn make it uniquely American.

The talk will begin at 6:30 pm and will last approximately an hour.

Join us for cold beer and a little history lesson! 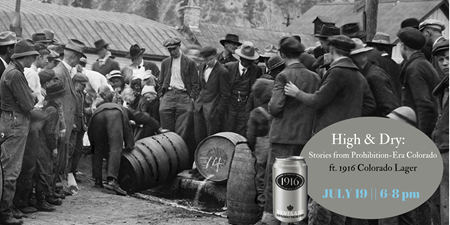 Ticket Price/Policy:
Tickets are $8 and include a 20oz pour of 1916 Colorado Lager