Cloud Cover descends upon Catawba Brewing Co., as the brewery unveils a new series of specialty release Hazy IPAs in 4-pack 16oz cans. The first beer in the series, Rising Sun (7.8 percent ABV), is slated to make landfall on Saturday, April 14, exclusively at Catawba’s four tasting rooms. Brewed and canned at their 10-barrel Charlotte brewhouse, Rising Sun is extremely limited – not expected to last beyond its inaugural weekend.

Typical of the new breed of New England-style IPAs, Rising Sun is cloudy, intensely hopped, hugely flavorful, and less bitter than traditional West Coast IPAs. It showcases the juicy tropical fruit flavors and exotic fresh hop character that have made the style so revered among craft enthusiasts. The beer’s distinctive hazy orange glow is a product of brewing techniques and ingredients unique to the style, as is its soft, frothy mouthfeel.

Each release in the Cloud Cover Series is named for a historic weather event in the Carolinas. Rising Sun pays homage to an 800-ton Scottish warship of the same name that was swallowed by an Atlantic hurricane off the coast of South Carolina in the year 1700. 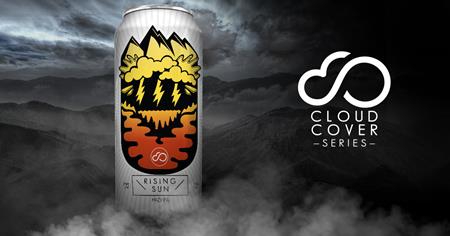