Release of Four Seasons Autumn '18 in bottle and on draft.

Featuring the next release in our award-winning barrel-aged program, The Four Seasons of Mother Earth - Autumn '18.

From our Head Brewer, Chris Baker:

"Blending is a very important part of creating a balanced and drinkable beer, but also adds to its complexity of flavor, so once we fully committed to growing our barrel program, we began stockpiling big stouts with various flavor profiles in anticipation
of future releases. Without that type of preparation, barrel aging can yield mixed results. Having reliable staples to pull from gives us more control of the finished product. This year’s Autumn was really fun to brew because we also added a massive amount of oats, making the beer extra creamy, and toasted coconut for a fresh, but dessert-like flavor. This is one of the most complex vintages to date." 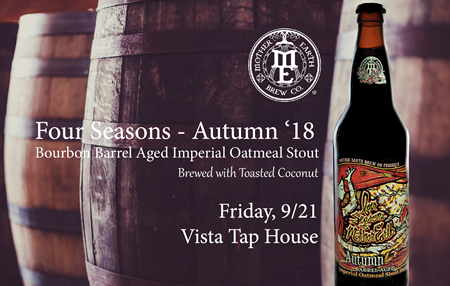