Catawba Brewing celebrates the 20th anniversary of their award-winning spiced pumpkin ale recipe, with the release of King Don’s Pumpkin Ale on Friday, September 15. This seasonal favorite traces its roots to the old Cottonwood Brewery in Boone, where head brewer Don Richardson perfected his pumpkin ale in 1997.

A few years later after Cottonwood had sold, Don generously agreed to lend his pumpkin beer recipe to his good friend Scott Pyatt, Co-Owner of Catawba Brewing. Don has since gone on to open Quest Brewing in Greenville, SC. Meanwhile, Catawba has continued to faithfully reproduce his recipe as an annual limited release, under the King Don’s name to honor its original brewer. 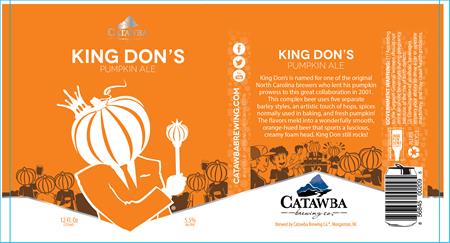