Come join us for a huge shebang the weekend of May 21 & 22. We are doing three things all at once:

1. Celebrating two years of brewing in Avondale Estates (how has it been that long???).

2. Releasing the first of our series of amazing barrel-aged mixed fermentation fruited sours – EMMYLOU, which features five different golden fruits. This alone is worth the price of admission.

3. After 5 1/2 years of existence, we finally, contrary to rumors we never would, are releasing our IPA, and it’s called Wise Blood.

Tickets can be purchased here: https://wildheaven.xorbia.com/

We look forward to raising a glass or two with you! 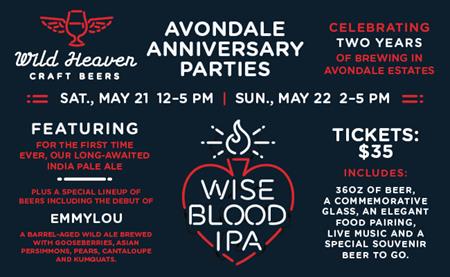