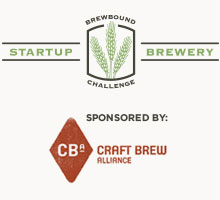 Brewbound is pleased to announce the return of its Startup Brewery Challenge, a unique opportunity for new craft brewers to partner with one of the country’s largest craft beer companies, Craft Brew Alliance.

The competition will take place at the December 5 Brewbound Session in San Diego. New craft brewery owners will have the opportunity to show off their business plans, new beers and receive immediate feedback from an expert judging panel. The 10 U.S. craft beer companies who enter will have been on the market for less than two years and have annual revenues of $2 million or less.

Competing for the chance to become Widmer Brothers’ “Brother for a Day,” the winning company will receive an all-expenses-paid trip to Portland, Ore. with the opportunity to craft a new collaboration beer with Widmer Brothers Brewing, take an extensive tour of the company’s pilot and production breweries, participate in Widmer Brothers’ daily taste panel and meet with its sales, marketing, graphics, quality assurance and packaging departments.

The first installment in Brewbound’s ‘Startup Brewery Challenge’ featured four Oregon-based craft beer companies and was held during the Brew Talks Portland meetup in July. After the challenge, the participating breweries and Widmer Brothers came together for a five-brewery collaboration, which resulted in the creation of 5th Wheel, a Belgian dark strong ale. The beer is currently being brewed at the Widmer Brothers 10-barrel pilot brewery in Portland and will be available, on draft, at the December Brewbound Session.

Brewers wishing to participate in the Startup Brewery Challenge should visit the application page for a complete listing of rules and selection criteria. Applicants will be evaluated and chosen by the Brewbound team. Questions about the competition can be directed to Mike Vassallo at mvassallo@bevnet.com or 617-231-8827.

The Brewbound Session, which will be held at the Paradise Point Resort & Spa in San Diego, is a full-day conference for beer industry professionals. The event focuses on the strategic marketing, brand building and business development issues that most directly impact craft brewers. A variety of distribution, retail, investment and branding discussions are offered.

To register for the 2013 Brewbound Session in San Diego, click here. For questions about the event or to inquire about small brewery pricing discounts, please contact Mike Vassallo at mvassallo@bevnet.com or 617-231-8827.