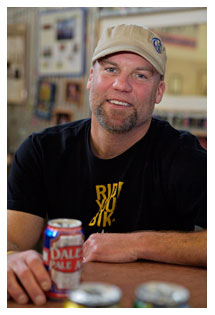 Brewbound is pleased to announce that Dale Katechis, the founder of Colorado-based Oskar Blues Brewery, as a speaker for the November 29th Brewbound Session in San Diego.

In 2002, Katechis, a restaurant and brewpub owner, made a risky decision that would forever change the craft beer business: he canned it.

That decision was laden with risks: it was out of step with ongoing packaging trends, it seemed to run counter to the high-end image of craft beer, and it raised concerns that the can itself could compromise the flavor of the product. Instead, it turned out to be the key point of differentiation for Dale’s Pale Ale, one that drew extra attention to the already high-quality product. Instead of a good beer, Dale’s became a good beer with a good buzz around it. Katechis’ risk became the consumer’s risk as well — and conferred similar status to the drinker when it paid off.

Since then, many craft beer brands have moved into cans — but few have had the equivalent of Katechis’ firsthand opportunity to evaluate the opportunities and drawbacks inherent in the kind of risk he initially faced when he took his brand to the next level.

And that’s why it’s of great value for Brewbound Session attendees to have the opportunity to hear from Katechis on the topic of risk-taking as a necessary and fundamental process in the growth of a craft beer brand. Drawing on his own thought process when evaluating risks like choosing to can and choosing when to invest in growth, Katechis will explain how he has been able to turn Oskar Blues into one of the hottest craft beer brands in the country.

The Brewbound Session will be held November 29th at the Paradise Point Resort & Spa, San Diego, Calif.  An early registration discount is available from now through October 15th.  In addition, a limited number of discounted hotel rooms are available to attendees.

See http://brewbound.com/conference for more information and to register.

Dale Katechis – a passionate and engaging person who is fueled by doing things differently – founded Oskar Blues Brewery in 1997. Since, Oskar Blues has spawned a number of diverse enterprises, including two brewpubs and a bicycle company, all of which stem from Dale’s commitment to being hands-on, devoting personal emotion and passion for his dedication to doing things against the grain.

Dale’s vision for the advantages of putting a Dale’s Pale Ale in a can instead of the status quo of a bottle was a laughable notion in 2002.  The willingness to see opportunity and thrive on risk has emerged as the cornerstone of what keeps Oskar Blues relevant and constantly evolving. Ten years after that first can of Dale’s Pale Ale, craft beer experts are calling 2012 “The Year of the Can” as more large and small breweries across the country are jumping on the bandwagon.