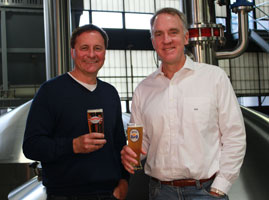 Brewbound.com is pleased to announce that Richard Doyle and Daniel Kenary, the co-founders of Harpoon Brewery — one of Boston’s oldest and most prominent craft operations — will be speaking at the Brewbound Session spring conference.

The all-day event, geared toward the strategic development of craft beer businesses, will be held on May 2 at the Revere Hotel in Boston, Mass.

Under Doyle and Kenary’s leadership, Harpoon has steadily grown to become the country’s eighth-largest craft brewery.  Its flagship beer, Harpoon IPA, is now one of New England’s most prolific and recognizable draught handles. Launched in 1986, Harpoon became one of the first craft breweries to own and operate two manufacturing facilities after purchasing a second brewery in Windsor, Vt. in 2000.  In 2012, Harpoon produced a total of 193,000 barrels.

At the Brewbound Session, Doyle and Kenary will explain the strategic decisions that have helped Harpoon grow into one of the country’s largest regional breweries, and how their operations have changed to maintain their status in New England as more breweries have begun operations. They will also discuss some of the key methods they have used to build the company’s flagship brand, Harpoon IPA, as well as the challenges that accompany balancing that product’s success with a diverse portfolio of unique offerings.

An early registration discount is available from now through April 1. Please visit https://www.bevnet.com/conference/register/brewbound to register.

Richard Doyle co-founded The Harpoon Brewery immediately upon graduation from Harvard Business School in 1986.  Prior to attending business school, Doyle received his BA from Harvard University and worked for several years for Lehman Brothers in New York City.  His only prior experience in the beer industry before starting Harpoon was bartending in New Zealand.

Doyle served as Chairman of the Brewer’s Association and on the Board of Directors.  He was a keynote speaker at both Harvard Business School and Boston University and has appeared as a speaker at Inc. Magazine’s “Growing the Company Conference” and “CEO Symposium”.  He has served as a panelist at the National Beer Wholesalers Association convention and the National Conference of State Liquor Administrators. Richard lives in Boston with his wife and two children.

During a six-year hiatus from the brewery from 1990 until 1996, Kenary worked as Chief Financial Officer at two biotechnology firms in the Boston area while remaining active on the board of Harpoon.  He has served on the Institute of Brewing Studies Board of Advisors, as a director and the treasurer of Save the Harbor/Save the Bay, a local environmental advocacy organization, president of the Boston Marine Park Business Association and president of the Massachusetts Brewer’s Guild.  He also serves on the Executive Committee of the Associated Industries of Massachusetts.  Originally from Worcester, Kenary lives in Wellesley with his wife and four children.