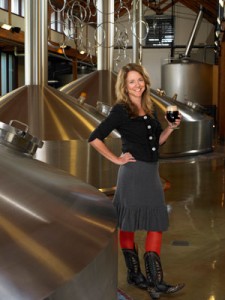 Brewbound.com is pleased to announce that Kim Jordan, the co-founder and CEO of New Belgium Brewing Company, will speak at the Brewbound Session on Nov. 29 in San Diego.

Starting from the basement of her home, Jordan has helped build New Belgium into the third-biggest craft brewery in the U.S., one that is currently distributed in 30 states. New Belgium produced 750,000 barrels at its Fort Collins, Colo. brewery in 2011, and is currently in the process of expanding into a second, $100 million brewing facility in Asheville, N.C.

At the helm of New Belgium Jordan has received praise for her ability to engage the tough decisions that brewers face as they grow, not the least of which has been the most effective way to broaden distribution, and the correct pace at which to do so.

In her presentation, Jordan will explain how she overcame a myriad of startup issues to position New Belgium for long term growth. She will provide examples of the ways in which that growth has occurred without significantly disrupting the New Belgium company culture, and why she has taken a structured, state-by-state approach to growth. With so many hurdles that craft brewers must overcome as they look to grow their brands, Jordan will discuss the importance of creating a well-crafted strategic plan as part of the path to success for new craft breweries.

As New Belgium has grown, Jordan’s decision-making skills have become one of the company’s most widely-praised assets. The Brewbound Session will offer her the chance to demonstrate those skills while offering an essential case study on how a well-crafted, strategic business plan can create long term success for young craft breweries.

Kim Jordan, co-founder and CEO of New Belgium Brewing, has cultivated her passion for social work, the environment and community to create one of the most successful corporations in America. After earning her degree in social work from Colorado State University, Kim worked as an advocate for women’s issues and family health at Project Self Sufficiency. Her lifelong commitment to developing healthy communities has informed New Belgium’s culture through progressive policies like employee-ownership, open book management and philanthropic giving. Kim is a Director on the Brewer’s Association and Ex Officio Board Member for the Beer Institute. She is also member of Colorado Governor John Hickenlooper’s Renewable Energy Authority Board.

In her more than twenty years as an entrepreneur, Kim has spoken to thousands of people in the business, nonprofit and academic worlds about how to create a vibrant and rewarding work culture that enhances the bottom line.

As CEO and President of New Belgium Brewing, Kim is active in day-to-day Sales, Branding and Organizational Development aspects of the business. Much of her time is spent on mid-range and long-term strategic development.

About the Brewbound Session