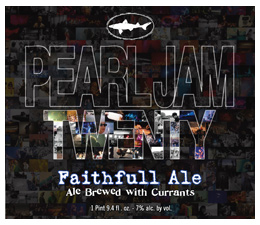 Faithfull Ale is a celebration of Pearl Jam’s 20th anniversary as a band and its extraordinary debut album, “Ten.”

The beer, a Belgian-style golden ale that checks in at 7 percent ABV was specifically created with the band in mind.

“I am stoked for this beer,” he added. “The band and their management have been great to deal with on this project and I think the liquid will speak well for itself.”

Calagione said that the band and management were fairly hands on for this project, citing multiple emails and conference calls during the creation process.

And as far as how the project came about, Calagione notes that the “overlap between the beer geek and music geek communities works in mysterious and glorious ways.”

“Going back and listening to Ten (album) while thinking about the recipe. Really Loud.”

In keeping with the brewery’s other musical collaboration, Faithfull Ale will be packaged in 750 ML bottles.

“It’s in a 750 ml bottle because we think it will be a very food-friendly beer and it has been built to share,” said Calagione.

Below is the official press release with more information on the beer.

Faithfull Ale is a celebration of Pearl Jam’s 20th anniversary as a band and its extraordinary debut album, “Ten.” In recognition of these milestones, this Belgian-style golden ale is delicately hopped to 20 IBUs and fruit-forward from 10 incremental additions of black currants over a one-hour boil. Faithfull will clock in at 7% ABV.

“To me, ‘Ten’ is the perfect example of a record-lover’s-record. The whole thing rocks,” says Dogfish Head President & Founder Sam Calagione. “As an off-centered brewery, we believe in celebrating the breadth of our whole portfolio and we feel an affinity for Pearl Jam — a long-player band in a singles-obsessed world.”

Dogfish Head also finds inspiration in Pearl Jam’s ethics, community-building and commitment to putting music before commerce. In recognition of this refreshing approach, Dogfish is donating $20,000 to The Nature Conservancy to aide in its efforts to preserve the plants, animals and natural communities that represent the diversity of life on Earth.

Dogfish Head is also rereleasing its previous collaborations with Sony Legacy: the Miles Davis-inspired Bitches Brew and the Robert Johnson shoutout Hellhound on My Ale. All three collaborations will be available this month in 750-ml bottles and on draft.

We plan to send Faithfull Ale to all states in which we currently do business, pending each state’s approval.

ABOUT PJ20:
2011 is a yearlong celebration of Pearl Jam’s 20-year history. The band started off the year with the release of a new live compilation album, Live on Ten Legs, followed by the expanded reissues of Vs. and Vitalogy in March. In September, Pearl Jam and friends celebrated with the Alpine Valley Labor Day anniversary weekend concert, a 10-date Canadian tour, followed by the theatrical release of the Cameron Crowe film Pearl Jam Twenty, with an accompanying book and soundtrack album and subsequent PBS broadcast on Oct. 21, ending the year with the DVD of the film available in October. For the latest, visit www.pearljam.com and www.pj20.com.