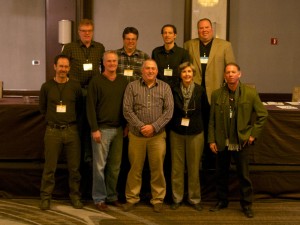 Chicago, IL — The United States Association of Cider Makers (USACM), the national trade association of the cider industry, has elected a new Board of Directors. After a year of astounding growth in the US hard cider industry, some 200 member cider companies that make up the USACM, met in Chicago as part of their annual Cider Conference.

Throughout 2013, the organization worked to grow membership and advance legislative priorities. It led to the creation of the CIDER Act which is currently making its way through the US House and Senate. The bill seeks to create a tax definition for cider that allows for increased carbonation and higher alcohol by volume over what current tax law allows.

The new board is made up of cider makers from across the country:

“The incredible growth of hard cider over the last year has made an organization like this all the more important,” says USACM President Mike Beck. “The USACM represents the interests of both the largest and smallest cider operations and allows the industry to speak with one voice. We are excited for the future growth of the category.”

The meeting kicks off the start of the annual Cider Conference, which provides networking and educational opportunities to cider makers. It runs through Friday at the Westin Hotel and Conference Center in downtown Chicago.

The USACM is an organization of cider and perry producers in the United States. It gathers and shares information about cider production, cider regulations, and cider apple growing, to help members improve their operations, raise awareness, and advance cider in the market. The organization was founded in February, 2013 at “CiderCon,” the third annual gathering of Cider Makers from across the US.