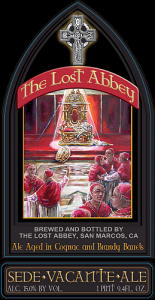 SAN MARCOS, CA, — Inspired by the shroud of mystery that envelopes the Vatican City during the Papal Conclave, The Lost Abbey presents their newest creation, Sede Vacante (SEH-deh vah-CAHN-teh). Created from a cloak and dagger blend of variously aged barrels previously stored in the catacombs of the brewery, Sede Vacante is a marvel of equal parts flavor and mystery. The creation of the beer itself was veiled in secrecy; the formulation written on black papyrus was burned soon after completion. An extremely limited amount of bottles, likely less than 100 cases, will be available beginning March 23rd. With its small-batch size, Sede Vacante’s lore will only be intensified by its fleeting availability.

“It’s not very often we get to fete the arrival of a new Pontiff” said Tomme Arthur, Director of Brewery Operations at The Lost Abbey. “We felt this was an exceptional event worthy of a new release from our Lost Abbey Barrel Program.”

Sede Vacante is a blend of Barleywine aged in Cognac barrels and Brandy barrel-aged Angel’s Share and at packaging came in at 15% abv. A contemplative beer with substantial depth, Sede Vacante imparts tones of dark fruit and vanilla, with a warming finish from the Cognac. The strongest beer to emerge from The Lost Abbey, portions of the beer spent almost 5 years in a barrel. Sede Vacante can be enjoyed immediately or cellared till the next Papal Conclave, however long that may be.

It’s been over 500 years since the last time a pope resigned, Pope Gregory XIII in 1415, and in accordance with Vatican Law, Sede Vacante (from Latin meaning “vacant seat”) occurs. Without a leader of the Holy See, Sede Vacante becomes a period of reflection of the prior Pope and joy and excitement for the selection of a new head of state for the Vatican City.

The artwork for Sede Vacante, as with all Lost Abbey bottles, was done by local artist Sean Dominguez and focuses on the image of an empty gilded chair illuminated from above and the assembly of Cardinals looking to fill the void.

Sede Vacante took full advantage of The Lost Abbey’s extensive oak-aging barrel program. “Cognac barrels were chosen for their complexity and depth, helping lend flavors of intensely ripe fruit and some essence of black strap molasses” said Gwen Conley, Director of Production and Quality Assurance. “The flavors derived from the Cognac barrels gave the beer its elegance and darkness worthy of the empty Vatican seat”

With over 850 barrels in the Oak-Aging Barrel program, unique and small-batch permutations have been possible and produced some of The Lost Abbey’s more sought after beer such as Cuvee De Tomme, The Veritas Series, Duck Duck Gooze and many others.

Sede Vacante will be sold on a limited basis for $35 per 750 ml cork finished bottle at the Port Brewing / Lost Abbey Brewery in San Marcos. Because of the limited amount, bottles will be sold on a first-come first-serve basis, with the on-sale beginning March 23rd at 10am.

Founded in 2006, Port Brewing and The Lost Abbey produces an extensive line-up of continental and American- inspired ales and lagers. Under the direction of visionary brewmaster and co-founder Tomme Arthur, the brewer has garnered dozens of awards in its seven year history including the 2007 Great American Beer Festival Small Brewery of the Year and the 2008 world Beer Cup Champion Small Brewery. The company’s beers, many of which are aged in oak barrels for 12 months or longer, are universally recognized for their complexity, unique flavors and bold boundary-pushing styles. For more information, contact Port Brewing / The Lost Abbey at 155 Mata Way, Suite 104, San Marcos, CA 92069, telephone (800) 918-6816, and on the web at www.LostAbbey.com