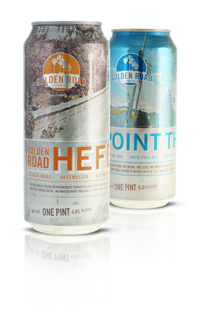 On November 1, Golden Road Brewing’s signature Point the Way IPA will be poured on draft at three locations operated by HMSHost: Home Turf in Terminal 1, Gladstone’s in Terminal 3 and at Home Turf and Redondo Brewing Bar in Terminal 6. Get Up Offa that Brown, Golden Road Brewing’s take on a more traditional English-style brown, will be introduced to all four locations before the end of the year. This is great news for the one-year-old Los Angeles brewery that has been warmly received by beer drinkers from San Diego to Santa Barbara.

“We are so pumped to showcase Golden Road Brewing at LAX,” says Brian Dewey, VP of Sales for Golden Road Brewing “Nothing goes better together than airports and beer and the ability to showcase our L.A.-brewed beers at LAX is the ultimate statement for us! We are thrilled to provide a local taste for people traveling through LAX.”

Adds President and Co-owner Meg Gill, “We are so grateful for this huge opportunity to offer our made-in-L.A. beers at one of the most iconic L.A.locales: LAX!Golden Road Brewing was born and bred in Los Angeles and anything that we can do to further identify with this beautiful city keeps us moving forward in the right direction.”

“With their L.A. based brewery and amazing story, Golden Road Brewing could not be more perfect for LAX. In just a year Meg and her team built Golden Road into one of the premier craft breweries in the country. Her success is an example of the opportunity Los Angeles holds for entrepreneurs who are willing to work hard. We are very proud to work with this extraordinary young L.A.entrepreneur and give our customers a chance to enjoy her exceptional beer.” Said Joe Waller, Vice President of Business Development for HMSHost. HMSHost operates restaurants around the world and works with the world’s top chefs including L.A.based Mark Peel, Susan Goin and Michael Voltaggio.

Golden Road Brewing was founded in October 2011 by Tony Yanow and Meg Gill, who are committed to bringing fresh beer to market in the most sustainable way possible. Golden Road Brewing is the maker of Los Angeles’ only canned craft beer, packaged in 16 oz. cans to deliver an honest pint of the brewery’s flagship Point the Way IPA and Golden Road Hefeweizen. Golden Road currently produces fourteen beers which include two Custom IPAs and 10 limited releases.