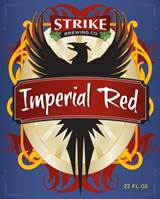 Strike’s first four beer styles (Blonde, Brown, Porter, Belgian Wit) reached the market in early 2012. Both an Imperial Red and IPA were introduced in June 2012. When told of Strike’s gold medal for the Imperial Red, Drew Ehrlich, Strike’s Brewmaster, responded, “That is fantastic! With so many top tier craft breweries competing, this recognition is truly an honor.”

Currently Strike has four year-round styles, the Blonde, Brown, IPA and Imperial Red. These beers can be found in many locations in Northern California as well as in newly entered Southern California markets.

Strike Brewing Co. was launched in December 2011 by three avid athletes who had a passion for craft beer and bringing a new brand to the Bay Area. They realized adventurers, explorers and competitors sought authentic beers with flavor and character. Strike beers are intended to be enjoyed amongst friends in good times and celebration. Our beers have been chosen and brewed not to quench the “fire within” but to reward and fuel it. For more information see www.StrikeBrewingCo.com