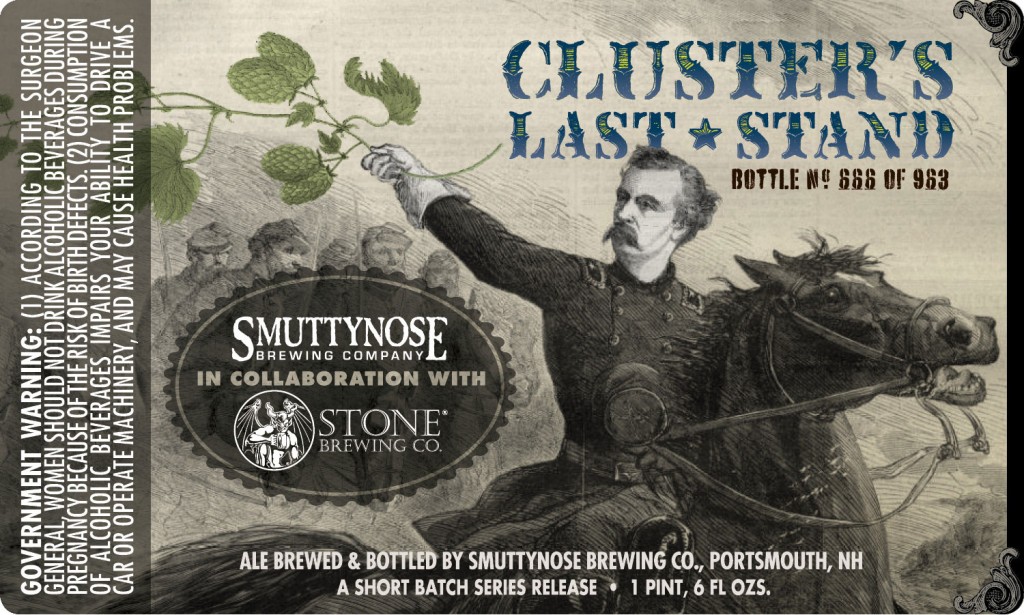 Smuttynose Brewing Company is proud to announce its partnership with San Diego’s Stone Brewing Co. for the New Hampshire brewer’s first collaboration brew, Cluster’s Last Stand. Cluster was once the king of American-grown hops (at one point, the variety made up 90% of all the hops grown in the America), but is now considered passé.The limited release beer is a recreation of the legendary Ballantine IPA, complete with the original retro hops varieties. Brewing takes place the morning of June 17 at Smuttynose. Greg Koch, CEO and Co-founder of Stone, will represent the brewery as part of his whirlwind tour through Portsmouth (see below for details).

“Cluster’s Last Stand is a tribute to the original American IPAs and the hops that that made them great (including Cluster),” said David Yarrington. “While the name started out as a way to lampoon a hop variety whose moment had passed, we realized that working with Stone, particularly in the wake of Brewmaster Mitch Steele’s book, was the perfect way to create a serious tribute to the earliest American IPAs and showcase some important, but forgotten hops that many ‘aficionados’ find passé in 2013.”

Steele literally wrote the book on IPAs and did a tremendous amount of research on the most popular beer style in the U.S. Not only does the book, IPA: Brewing Techniques, Recipes and the Evolution of India Pale Ale have some great information and historic recipes, it also gives a nod to Portsmouth’s Frank Jones Brewery as the home of America’s first IPAs. While thatrecipe hasn’t surfaced yet, the Ballantine recipe is in the book and that’s what will become a mid-July, 30 barrel (930 gallons) release in the New Hampshire brewer’s Short Batch Series.

A previous batch of Cluster’s Last Stand was brewed at Portsmouth Brewery in January 2012, with Steele, Yarrington and Tod Mott, then Head Brewer at Portsmouth Brewery. That batch, a slightly altered version of what’s being brewed now, made just 220 gallons. Confined to the Portsmouth Brewery’s four walls, it came and went, pleasing beer drinkers with its antiquated deliciousness. The beer wasn’t super piney or citrusy, nor did it smell like New Zealand white wine, but it was quite hoppy, deeply resinous and by all accounts, unique. A few bottles made it back to Greg Koch at Stone. He and Mitch both liked the beer and everyone thought it would be exciting to brew it on a larger scale.

Package information and release details will be announced over Smuttynose’s blog and Facebook page ahead of a mid-July release.A few kegs will be sent to Stone’s farm-to-table restaurant, Stone Brewing World Bistro & Gardensto serve to eager guests, marking the first time Smuttynose beer has been for sale in California.

In addition to brewing Cluster’s Last Stand, Greg has a few other events in Portsmouth. From 3pm-4pm, he’ll be recording a conversation with the hosts of the Seacoast Beverage Lab podcast for future airing. From 4pm-5pm he’ll host a meet & greet in the Portsmouth Brewery’s LaPanza Lounge where three Stone beers; Stone Cali-Belgique IPA, Stone Ruination IPA and Stone IPA will pour from the new draft system. Greg’s day will wind down at a sold-out Stone beer dinner at the Sheraton Harborside.

Smuttynose Brewing Company is New Hampshire’s original local brewery. Independently owned since its opening in 1994, Smuttynose brews over 25 different styles of beer for distribution in 23 different states, including their best-selling Finestkind IPA and international award-winners Robust Porter and Wheat Wine Ale. In 2012, our 50 employees worked together to brew, package and sell nearly 41,000 barrels (over 10 million pints) of all-natural, unfiltered, honest-to-goodness beer from our Portsmouth brewery. In August of 2012, Smuttynose officially broke ground on its new production facility at the 14-acre Towle Farm in Hampton, NH, which will be operational by the end of 2013.