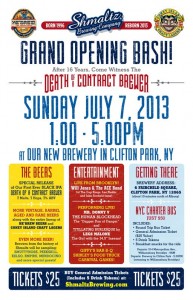 For 16 years, Shmaltz championed contract brewing and developed a dedicated cult following for their award-winning HE’BREW – The Chosen Beers┬« and Coney Island Craft Lagers┬«. Breaking company tradition, Shmaltz opens its own New York State production brewery, boasting a 50-barrel brewhouse with 20,000 barrels of annual capacity. The new Shmaltz brewery will package 12 and 22 ounce bottles and kegs of their diverse core and seasonal favorites. Several new releases and collaborations are on tap for 2013, and Shmaltz will continue their acclaimed barrel-aging projects, utilizing a current inventory of more than 300 bourbon, rye whiskey, and tequila barrels.

The grand opening party features a freaktastic line-up of talent scheduled to entertain attendees all afternoon. Get ready to boogie down to the sweet sounds of Brooklyn’s own Will Jones & The ACE Band(of The Dap Kings, Lee Fields and John Scofield fame); then marvel at death-defying performances from the “Dapper Dan of Danger,” The Human Blockhead Donny Vomit, and titillating burlesque by the girl with the 34.5 inseam, Legs Malone. Indulge your inner carny with carnival games and cotton candy; food from Clifton Park’s Giffy’s BBQ and Shirley’s Café foodtruck will be available for purchase. The $25 General Admission ticket buys you entrance to the coolest brewery party this summer and includes five beer tokens; additional tokens can be purchased on-site.

Need a rockin’ ride upstate from NYC? $50 buys you a round-trip charter bus ticket from Brooklyn to Clifton Park, breakfast snacks, entrance to the Grand Opening Bash and five beer tokens. Buses will depart from Kellogg’s Diner (514 Metropolitan Avenue, Williamsburg, Brooklyn) at 9:00 am sharp to Clifton Park. Buses will leave from Clifton Park at 5:30 pm to return to NYC. Space is limited so grab tickets now! And, attendees must be 21 years old and over.

Following the opening event, craft beer enthusiasts will be able to enjoy the nectar of the new brewery gods at Shmaltz’s 1,700 square foot tasting room throughout the year. The brewery tour schedule will be announced on July 7, 2013. L’Chaim!

Ranked in 2013 as one of the “Top 100 Brewers in the World” by RateBeer.com, Shmaltz won 9 Gold and 5 Silver Medals in the Word Beer Championships in 2012. A recipient of the “Distinguished Business Award” by the Brooklyn Chamber of Commerce, Shmaltz was also included in the “Top 50 Fastest Growing Bay Area Companies” by San Francisco Business Times.

Established in San Francisco in 1996 with the first batch of 100 cases of HE’BREW Beer┬« bottled, labeled, and delivered by hand, Shmaltz has sold more than ten million bottles of beer to date. Along with their acclaimed line of HE’BREW Beers┬«, Shmaltz introduced its sideshow-inspired Coney Island Craft Lagers┬« which celebrate the spirit of “America’s Playground”. Shmaltz offerings are available in more than 30 states through 35 wholesalers at more than 3,500 retail specialty shops across the U.S.

With the opening of the “World’s Smallest Brewery” in Coney Island, NY (1-gallon at a time, since 2011), Cowan spearheaded the creation of the non-profit New York City Brewers Guild in 2012 and serves as its President.

Cowan recently appeared at the 2013 Craft Brewers Conference to speak about the transition from contract brewing to in house production as well as small batch brand strategies. He has also presented at the Great American Beer Festival, BevNet’s Brewbound conference, Beer Advocate’s Extreme Beer Festival, the Atlanta and the St. Louis Jewish Book Fairs, and the San Francisco and New York Jewish Museums.