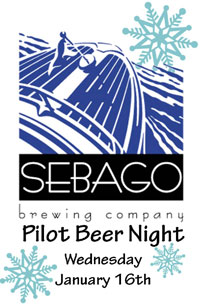 GORHAM, ME – On Wednesday January 16th at 5:00pm, Sebago Brewing Company is hosting their next Pilot Beer Night at the Scarborough brewpub at 201 Southborough Drive in Scarborough, ME. In 2012, Sebago Brewing Company instituted a pilot brewing system at their brewery to test new beers. Some of the top beers brewed on the pilot system have since been released as Single Batch Series beers.

The following beers will be available that have been brewed on the pilot system by various Sebago staff members over the last few months:

Each pilot beer will be $3 for a 12oz pour. It is recommended to arrive early as supplies of these beers are very limited. Pilot Beer Night will begin at 5:00pm on Wednesday January 16, 2013.