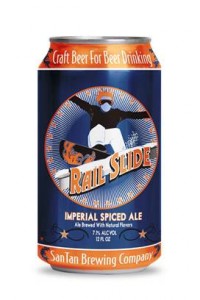 RailSlide Imperial Spiced Ale is a brew based on a traditional English Strong Ale with winter flavors including fresh ginger, cinnamon and licorice. It boasts a deep brown color and was created in celebration of the pioneering punk spirit of the American craft brewer.

One year ago, SanTan Brewing Company launched Arizona’s first ever seasonal canned beer series with the introduction of RailSlide Imperial Spiced Ale. Since then, three other seasonal beers have donned the aluminum suit including Sex Panther Double Chocolate Porter, SuperMonk IPA and the award winning Mr. Pineapple Wheat Beer. To find a pint or can of RailSlide near you, visit SanTan Brewing Company’s Beer Detective online at www.santanbrewing.com/find-santan-on-tap.

Open since 2007 under the leadership of head brewer and owner, Anthony Canecchia, SanTan Brewing Company has established a strong reputation as Arizona’s favorite craft beer. In addition to brewing, SanTan features a friendly neighborhood brewpub in Downtown Chandler, which has quickly become one of the top local food and beer destinations in the East Valley.

In 2009, SanTan Brewing began distributing their core and seasonal brews throughout the state of Arizona, operating with a mission to pair craft beer with craft food that would inspire great conversation and good times. The brewpub and SanTan beers have won numerous national and statewide awards including two awards at the US Open Beer Championship: bronze in 2013 and gold in 2011. SanTan Brewing also took home a silver medal at the 2011 Great American Beer Festival and won Best Brewery in Arizona, selected by the Phoenix New Times, in 2011.