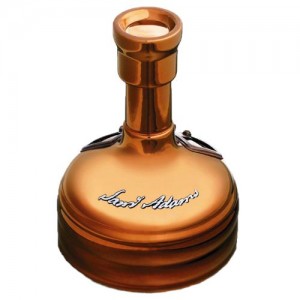 BOSTON, MA — The brewers at Samuel Adams today announced the 2013 batch of Samuel Adams Utopias, the brewery’s most renowned barrel-aged, extreme beer and one of the year’s most anticipated beer releases. This year marks the first time Samuel Adams brewers have blended Utopias with Samuel Adams Kosmic Mother Funk (KMF), a Belgian-style ale barrel-aged for at least nine months (and up to two years) in Hungarian oak tuns.

Meant to be savored like vintage fortified wine or fine cognac, Utopias is a strong, rich, uncarbonated dark beer best served as a two-ounce pour at room temperature in a snifter glass. Samuel Adams Utopias is brewed in small batches, blended, and aged in the Barrel Room at the Samuel Adams Boston Brewery.

About the 2013 batch:
Utopias is known for its tobacco and darker fruit notes, and drinkers will continue to notice this character from previous batches, but the KMF blend (also used in Samuel Adams Barrel Room Collection beers) brings a whole new spectrum of flavors and complexity to the beer, including brighter fruit notes in the finish and just a hint of sourness which tones down the sweetness of the brew a bit.

For the 2013 batch, the brewers also aged a portion of the beer in hand-selected, single-use bourbon casks from the award-winning Buffalo Trace Distillery. This additional aging process enhances the beer’s distinct notes of vanilla and maple. The 2013 release also spent time in Port casks from Portugal, which contribute elegant, dark fruit aromas. The resulting release of Utopias has notes of dark fruit like fig, subtle sweetness, and a deep rich malty smoothness. Utopias 2013 weighs in at 28 percent alcohol by volume (ABV).

Founder & Brewer Jim Koch’s thoughts on the addition of KMF:
“Utopias takes time to perfect. We are constantly checking in on it: tasting, comparing, blending vintage beers and trying different blends to see what might improve the flavor. This year, as part of that exploration, we incorporated a touch of our Kosmic Mother Funk (KMF) in the recipe and really liked what we tasted. The KMF brings a whole new spectrum of flavors and complexity to the beer, including brighter fruit notes like cherries and plums and just a little earthiness.”

Samuel Adams Utopias — The back story:
Since its introduction in 2002, Utopias has become one of the most sought-after brews for beer fanatics. Utopias grew out of Samuel Adams founder and brewer Jim Koch’s passion for creating beers that are robust in flavor and employ innovative brewing and aging processes. Jim wanted to challenge the traditional opinion of what beer could be, and in 1994 he released Samuel Adams Triple Bock with 17.5 percent ABV. Triple Bock served as a model for Samuel Adams Millennium, a 21 percent ABV strong ale which commemorated the year 2000. Utopias took “extreme” beer to a new level two years later, when it weighed in at 24 percent ABV. It was brewed again in 2003, 2005, 2007, 2009, 2011 and 2012, producing brews that have reached 29 percent ABV.

Utopias is brewed using traditional methods. The brewers begin with a blend of two-row Caramel and Munich malts that impart a rich, deep amber color. Noble hops — Hallertau Mittelfrueh, Spalt Spalter and Tettnang Tettnanger — are also added to lend complexity and balance. During fermentation, several yeast strains are used, including one normally reserved for champagne. The beer is then blended with a variety of different brews, some of which have been aged in different wood barrels for more than 20 years. As a result of the blending and aging, Utopias invokes the flavors of a rich vintage Port, fine Cognac, or aged Sherry while feeling surprisingly light on the palate.

Where to find Utopias:
The brewers make fewer than 15,000 bottles of this limited-edition beer due to the long aging required. It will be available at select specialty beer and liquor stores starting this November for a suggested retail price of $199 per bottle. For additional information and to locate a retailer visit www.samueladams.com.

Also new this year — The first craft beer-seasoned cigar:
Samuel Adams has teamed with Ted’s Cigars to create a limited-edition, Utopias-seasoned cigar; the first ever craft beer-seasoned cigar. Created to be enjoyed on its own or as a pairing with Utopias, the cigar features the brew’s distinct subtle sweetness and rich notes of maple and vanilla along with a spicy complexity from the tobacco blend. Hand rolled in the Dominican Republic and flavored at Ted’s Cigars’ Louisville headquarters, the Utopias-seasoned cigars provide a pronounced yet subtle Utopias flavor without affecting the cigar’s integrity. This is done through Ted’s tedious, proprietary process of aromatic seasoning, which perfectly marries the complex flavors of both the cigar and the Utopias.

Ted Jackson, president of Ted’s Cigars, on the Utopias-seasoned Cigar:
“Cigars and craft beer, particularly a complex brew like Utopias, have more in common than most people would imagine and complement each other quite well. Aficionados of both cigars and beer know that subtle flavors and delicate touches can elevate the drinking or smoking experience tenfold. It’s exciting for us to work with such an innovative brewery to create these one-of-a-kind cigars.”

When enjoying Utopias and the seasoned cigar together, the beer brings out a creamy, spicy sweetness from the cigar and enhances the subtle leather and smoky character in the cigar’s finish.

Ted’s Utopias-seasoned cigars make the perfect stocking stuffer for cigar and craft beer lovers alike, and will be available exclusively at TedsCigars.com/SamuelAdams during the months of November and December 2013. Pair them with Samuel Adams Utopias for the ultimate beer-lover’s holiday treat.

ABOUT THE BOSTON BEER COMPANY:
The Boston Beer Company began in 1984 with a generations-old family recipe that Founder and Brewer Jim Koch uncovered in his father’s attic. Inspired and unafraid to challenge conventional thinking about beer, Jim brought the recipe to life in his kitchen. Pleased with the results of his work, Jim decided to sample his beer with bars in Boston in the hopes that drinkers would appreciate the complex, full-flavored beer he brewed fresh in America. That beer was aptly named Samuel Adams Boston Lager┬«, in recognition of one of our nation’s great founding fathers, a man of independent mind and spirit. Little did Jim know at the time, Samuel Adams Boston Lager would soon become a catalyst of the American craft beer revolution.

Today, The Boston Beer Company brews more than 50 styles of beer. It relentlessly pursues the development of new styles and the perfection of classic beers by searching the world for the finest ingredients. Using the traditional four vessel brewing process, the Company often takes extra steps like dry-hopping, barrel-aging and a secondary fermentation known as krausening. The Company has also pioneered another revolution, the ‘extreme beer’ movement, where it seeks to challenge drinker’s perceptions of what beer can be. The Boston Beer Company has been committed to elevating the image of American craft beer by entering festivals and competitions around the globe, and in the past five years has won more awards in international beer competitions than any other brewery in the world. As an independent company, brewing quality beer remains its single focus. Although Samuel Adams beer is America’s largest-selling craft beer, it accounts for only one percent of the U.S. beer market. The Boston Beer Company will continue its independently-minded quest to brew great beer and to advocate for the growth of craft beer across America. For more information, please visit www.samueladams.com.

ABOUT TED’S CIGARS
Ted’s Cigars was formed in 1996 and has since become the preeminent producer and marketer of premium seasoned cigars. Ted Jackson himself, through countless hours of trial and error, developed the proprietary seasoning process that ultimately established the iconic brand and number one selling spirits-seasoned cigar in the world. Ted’s Cigars is revered within the cigar industry for developing the finest premium, handmade, branded cigars available today. The company takes great pride in its hands-on and labor intensive process, going to great lengths to produce a high end, quality cigar while not jeopardizing the integrity of the tobacco during the process. To learn more, please visit www.tedscigars.com.