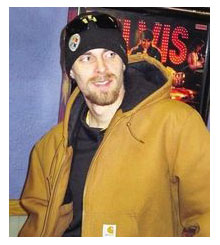 PORTSMOUTH, NH – Redhook Brewery has announced that the Ben Harris Beer, a tribute beer brewed in honor of Ben Harris, a longtime member of the Redhook family who passed away earlier this year, is now available on draught and in bottles in select markets, including the brewery’s backyard markets in New England and in Ben’s home state of Pennsylvania. A portion of the proceeds from the beer will benefit the Benjamin Harris 2012 Memorial Trust.

“Ben Harris was longtime member of the Redhook family and a dear friend to all of us. We are looking forward to sharing this special beer with Ben’s family, friends and beer drinkers who live outside of Portsmouth, New Hampshire,” said Alex Kopf, Redhook senior brewer. “Ben Harris Beer was brewed in tribute to Ben, and we hope that the community will join us in honoring his legacy, celebrating his life and remembering Ben with every pint of Ben Harris Beer.”

Ben Harris Beer is Redhook’s special take on the classic cream ale style, brewed in tribute to our friend and teammate, Ben Harris. This is a beer that Ben would have wanted to drink. It’s a beer brewed for those who work hard and play hard, just as Ben did. But most importantly, it’s a beer brewed for us to share as we remember and celebrate Ben’s life.

Ben liked a touch of hops in his beer, so we hopped up a classic cream ale recipe, Redhook style. Ben Harris Beer was brewed with ingredients you’d expect to find in cream ale: two-row barley malt, Carapils for a touch of sweetness, Victory malt for a touch of breadiness and a dose of corn for good measure. We hopped it up with some Sterling, Saaz, and Hallertau hops, which create a crisp, clean and refreshing beer just for Ben. Ben Harris Beer is 4.7% ABV and 19 IBU.

Ben Harris Beer was recognized on Nov. 2 at the 16th Annual Great International Beer & Cider Competition where it received second place in the Cream Ale category.