LITTLETON, CO. — Paulaner Brewery, Munich’s traditional Bavarian brewery, has created an authentic traveling biergarten to celebrate Oktoberfest, paying homage to the 200th anniversary of the biergarten. The truck is criss-crossing the country with appearances in places like Long Island, N.Y., Atlantic City, N.J., and Las Vegas. German beer lovers can also win the chance to have the truck come to them.

A complete party-in-a-truck, Paulaner can turn any town into “Little Bavaria” with its European biergarten right on board. Once the large semi-truck is emptied, the side drops and transforms any area into an upscale party complete with sound system, Bavarian decorations, and traditional biergarten tables and benches. Within hours a biergarten large enough to host 600 guests is ready to go. Beer fans can see it for themselves.

Want the beer truck to come to you? Beer enthusiasts can win the chance to have this beer truck come straight to their door for a free beer party on wheels. Simply enter by liking the Paulaner Facebook page at www.facebook.com/paulanerusa. The truck will drive to the location of the winner’s choice and he or she can host his own Oktoberfest in authentic Bavarian style for 100 of his closest friends. 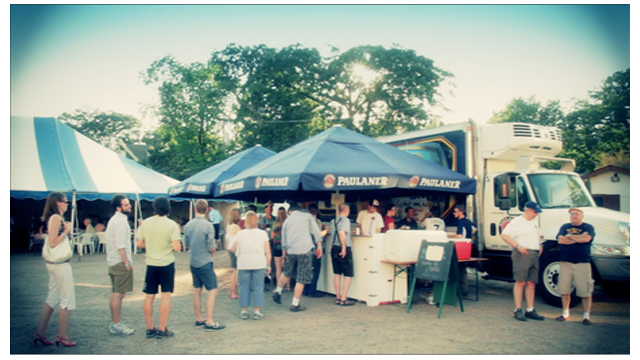 The familiar Biergarten culture, which now enjoys worldwide popularity, originated 200 years ago in Munich. Wheat beer fans in a whole host of countries are raising a glass of Paulaner to celebrate the start of the Biergarten season.

The biergarten is truly a European way of life — it’s the great American coffeehouse, the neighborhood bar, and a 4th of July picnic-in-the-park all rolled into one. In Europe biergartens are the center for social interaction, they fill nightly for good food and drink, good conversation, good music, and good fun!

The origins of the Biergarten can be traced back to the 16th century in Munich. The Bavarian Brewing Ordinance was enacted in 1539 following a series of serious brewery fires and restricted beer brewing to the winter months between September and April. For the breweries, which needed stocks of cool beer for the summer, this presented an insurmountable problem. The solution was the underground beer cellar. The brewers protected their beer against the sun’s heat by planting large numbers of chestnut trees and spreading out light-coloured gravel. From 1812 onward, King Ludwig I of Bavaria permitted breweries to serve their own beer to guests on the land which above the beer cellar. The Biergarten was born.

As the first warm rays of sunshine emerge each year, guests are attracted to Paulaner Biergartens all over the world to relax, to quench their thirst and to sample a little Bavarian savoir vivre. The Biergarten, which has represented freedom and serenity for 200 years, simply epitomises the way of life in Bavaria. It also represents an attitude which anyone can adopt, whether old or young, rich or poor, local or from afar. And this year in the U.S., Paulaner brings the biergarten to local bars and restaurants nationwide.