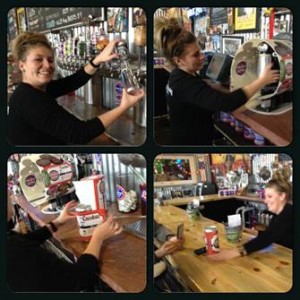 Longmont, CO & Brevard, NC — What IS a CrowlerÔäó?

A CrowlerÔäó (CAN + growler) is a 32-ounce CAN filled with fresh craft beer from the source. Yep, draft beer in a portable growler-sized CAN. It’s the newest innovation coming from the Oskar Blues Brewery taproom and their development partner Ball Corporation, the pioneers of the American craft beer-in-a-CAN movement.

“We get off on pushing the limits, doing things differently and the CrowlerÔäó is another step of innovation to take advantage of what the can package has to offer from behind the bar. More beer options in more cans, we’re working on creating one big glasshole,” says Jeremy Rudolf, the man behind the CrowlerÔäó integration at Oskar Blues.

Craft beer drinkers dig their growlers filled in local taprooms, but standard glass growlers are often brought into pubs and tap rooms without being cleaned correctly, which affects the taste and cleanliness of the refill. They also don’t seal well and allow light in, while the CrowlerÔäó is more portable and takes advantage of what the can has to offer by eliminating light-struck or skunky beer.

The CrowlerÔäó is a one-use, recyclable 32-oz can that is filled and seamed right at the bar in the Tasty Weasel Tap Room in ColoRADo, using an All-American Can Company seamer. This is a tabletop design commonly used for canning homemade food into steel cans and allows you to take home one-off and specialty beers. The filler was modified to work with aluminum, and the height adjusted to accommodate the CROWLERÔäó height. Just like its smaller 12-oz. counterpart, the CrowlerÔäó is made from aluminum that has 68% recycled content and also is infinitely recyclable.

Here’s how a CROWLERÔäó works: Oskar Blues added a CO2 purge station to purge the cans before filling them, which helps assure that there is no beer-degrading oxygen added to the beer. The CROWLERÔäó is purged and immediately filled. Then the lid is applied and the CROWLERÔäó is placed onto the seamer pedestal. The pedestal is turned so that the can is raised up and locked under pressure into the seamer. Turn it on, and push GO. Turn it off, twist the pedestal to lower the can, and take it with you to enjoy. Once you open the CROWLERÔäó, drink it up—ensuring the craft beer is consumed in a single serving while the beer is in its prime, just like in the taproom.

Why CROWL? Oskar Blues and Ball have worked together to figure out fun ways to keep craft beer fresh for years. Oskar Blues uses stainless steel growlers in the tasting rooms, but the brewery is always looking for other options that are glassless. The OB crew got together with the innovation folks at Ball and they presented their 720 can as a possible idea for tasting rooms to use as a “to go” option. It allows OB beer lovers to get a reasonable volume of any beer on draft to go in a protected & portable new package. Thirty-two ounces is great for a barrel-aged or specialty beer from a price standpoint, plus it’s a volume that can be consumed in a single sitting with a friend (or six). As always, CANs, even big ones, are more portable and less breakable than glass, making the CROWLERÔäó a natural partner for your next beer-soaked outdoor experience.

More than 300 CROWLERÔäóS were sold from the Tasty Weasel in ColoRADo in December. They make great gifts. The OB crew has been toting them to events and festivals giving beer lovers a taste of some of the special brews rarely available outside of the breweries. Look for The CROWLERÔäó to come to the North Carolina Tasty Weasel soon!

Oskar Blues will be serving these special brews out of the CROWLERÔäó at Big Beers, Belgians and Barleywines in Vail, ColoRADo, on January 11: Anejo Tequila Barrel-Aged GUBNA, Appleton Estates Rum Barrel-Aged Ten FIDY, and Obliterator Doppelbock.