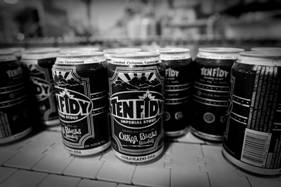 CHICAGO – Oskar Blues announces the release of its famed seasonal Ten FIDY Behemoth Canned Imperial Stout in Chicago. Fans of the beer, which was last available in February, have been chomping at the bit for months waiting for the winter seasonal to be available again—and now it’s Chicago’s turn to witness the craze!

The avant-garde craft brewery, which aroused the craft-beer-in-a-can craze, has continued to push the boundaries of what is expected out of a canned beer with this delicious stout. The genre bending canned beer that has bulldozed beer connoisseurs will be available in Chicago this week on tap and in cans at SmallBar Division, The Owl and Jake Melnick’s and will continue to pop up around Chicagoland until February. To give Chicagoans the chance to focus on this tasty brew, Oskar Blues’ GUBNA Imperial IPA has gone to seasonal status and will be available again in March. This titanic, immensely viscous stout is 10.5% ABV, loaded with inimitable flavors of chocolate-covered caramel and coffee that hide a hefty 98 IBUs underneath the smooth blanket of malt.

Oskar Blues head brewer Dave Chichura lets it be known “Ten FIDY is no walk in the park to create; it’s a labor intensive beer.” Ten FIDY’s gargantuan grain bill is just short of 50% specialty malts that are packaged in 55 pound bags and loaded into the mill by hand. The many bags of oats are poured directly into the mash tun. Oats and rice hulls are lugged up the 20-odd stairs to the top of the brew-deck to be placed near the mash tun. “We aren’t mashing it with a computer from a comfy control room. It takes hands-on craft brewing to make a big ‘ole can of eat-it-with- a-fork stout,” adds Dave.

Ten FIDY has been tagged with accolades that nearly stand up to the viscosity of the behemoth in a can:

Set in the heart of Colorado craft beer country, Oskar Blues Brewery in Lyons began canning its beers in November of 2002 with a hand-canning line in the 60- year-old barn next door to their funky little brewpub. Although it’s now a full- throttle canning operation that is quickly expanding its cult-like following across the nation, Oskar Blues remains true to its original mission of simply blowing minds with what can come out of a can of beer. Three-dimensional brewing since 1999, Oskar Blues began the “Canned Beer Apocalypse” in 2002 when Dale’s Pale Ale became America’s 1st CANNED craft beer. For additional info, visit www.oskarblues.com.