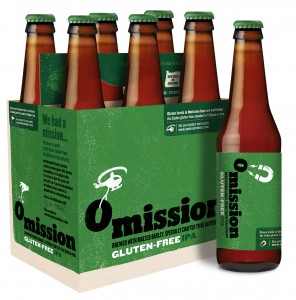 “Omission IPA is the first authentic gluten-free IPA brewed with malted barley to hit the market,” said Joe Casey, Widmer Brothers Brewmaster. “This IPA is brewed in the traditional Northwest IPA style, yet is specially crafted to be gluten-free. The beer uses a generous amount of Summit and Cascade hops giving it a beautiful citrus flavor and aroma.”

“At Omission, we’re constantly innovating, and exploring new opportunities to share our love of craft beer with anyone of legal drinking age, including those with gluten sensitivities,” said Terry Michaelson, CEO, Craft Brew Alliance, and longtime celiac. “Part of that is experimenting with different beer styles that meet our rigorous gluten-free standards while staying true to our commitment to high-quality craft brewing. Omission IPA hits the mark, and we can’t wait to get it into the hands of our customers in Oregon this spring.”

Omission IPA has a suggested retail price of $9.99 per six-pack and will be available in six-packs of 12-ounce bottles at the Widmer Brothers Gasthaus Pub in Portland, Ore., and at retailers, restaurants and bars throughout the state.