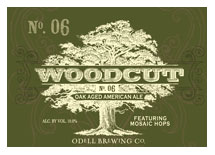 FORT COLLINS, CO. — On October 6, 2012 Odell Brewing will release its sixth Woodcut brew, an oak aged American ale featuring Mosaic hops. Woodcut No. 6 is the first dry hopped offering in the series, and is the result of over a year of collaboration between the Mosaic hop farmers and Odell Brewing.

“We shared some Woodcut No. 3 and Woodcut No. 4 with Jason Perrault, a 4th generation Yakima Valley hop farmer, and he loved it,” said Brendan McGivney, head of production at Odell Brewing. “He and Brad Carpenter (his family began growing hops in the valley in 1868) then shared some experimental hops with us, and we fell in love with them.”

Odell Brewing began brewing with the experimental hops, known only as “HBC 369” at that time. The hops offered a profoundly unique flavor and aroma, so the brewers invited the pair to come to the brewery to brew Woodcut No. 6 with them, at which point they had landed on the name “Mosaic.”

The brewers included both Mosaic and another yet-to-be-named experimental hop variety in the kettle and Hopback. The beer was dry hopped with 100% Mosaic hops, and transferred to virgin American oak barrels where it aged for several months. The final blend marries the unique and complex tropical fruit sweetness of the Mosaic hop with the vanilla and toasted oak from the new barrels.

Odell Brewing will celebrate the release of Woodcut No. 6 on October 6th in the Tap Room with live music and local food. The brewery will also pour the beer at The Great American Beer Festival┬« October 11th — 13th.