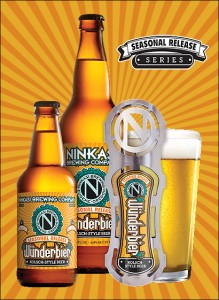 EUGENE, Ore.—With warmer months and endless adventures ahead, Ninkasi Brewing Company aims to help craft beer admirers appreciate summer even more with the release of W├╝nderbier to its Seasonal Release Series. A K├Âlsch-Style ale, W├╝nderbier is perfect for summertime enjoyment, offering a beer that is crisp, sweet and luminous.

Brewed in the traditional fashion, W├╝nderbier ferments at ale temperatures and is conditioned at colder lager temperatures, giving this golden-colored beer a subtle, crisp sweetness with a light flavor. W├╝nderbier has a light body and a dry yet crisp finish, offering a beer that is a balanced and sessionable.

“This K├Âlsch-style beer is perfect for chilling with friends,” says Jamie Floyd, founding brewer and co-founder of Ninkasi. “Crisp, delicate, bright, and light this beer allows us to enjoy each other’s company without distractions and is an exceptional pairing to summertime fare.”

Available for the first time, W├╝nderbier can be found in 12 and 22-ounce bottles and on-draft June through August.

Description: Conquer summer with W├╝nderbier in-hand and say “cheers” to the pure and unadulterated fun of the season. In tribute to the favored beer of Cologne (K├Âln), Germany, this German-Style K├Âlsch is golden-colored with a subtle, crisp sweetness. A wonderful summer story awaits in every sip; it’s W├╝nderbier!

Tasting Notes: Fermented at ale temperatures and conditioned at colder lager temperatures, this golden-colored beer has a subtle, crisp sweetness with a light flavor. With a light body and a dry yet crisp finish, this beer is a balanced and sessionable, perfect for summertime enjoyment!

Nielsen CGA: Half of Consumers Unlikely to Return to On-Prem...