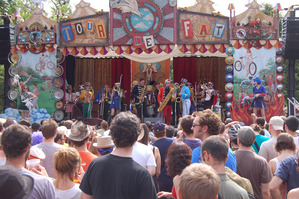 FT. COLLINS, Colo. — New Belgium Brewing today announced the long-awaited Tour de Fat 2013 schedule. The tour, now in its 14th year, will spin into 12 cities across the nation. This daylong festival in the park celebrates the bicycle, showcases New Belgium beers, and provides eclectic and engaging entertainment for all.

The event is free, yet all proceeds from food and beer go to local biking groups. Over its course, Tour de Fat has raised more than $2 million for nonprofit organizations.

Each festival kicks off with a police-escorted bicycle parade through city streets in celebration of the bike. Costumes are encouraged but not mandatory, though the truly aware come prepared. Each parade route is designed for people of all skill levels, wrapping up at the park for a day of both sensory stimulation and relaxation.

After the parade, the festival stages heat up with national musical acts, touring comedy groups, artistic ensembles and unexpected entertainment. New this year is the opportunity to heighten your beer knowledge through beer contests, providing the chance to explore new brews and revel in a unique lineup of New Belgium selections. Kids of all ages can test their bicycle prowess on art bikes, dance in the grass and explore a wide variety of games and activities, such as giant versions of telephone and Plinko.

“Tour De Fat brings together entire communities to celebrate the bike as a vehicle for social change and good-time fun,” said Matt Kowal, New Belgium Brewing’s Tour de Fat Impresario. “This is a chance to see world-class entertainment in your own backyard with a beer in hand while you raise money for bike advocacy. That’s like a win-win-win situation.”

One brave role model in each city will volunteer to trade their car for a bike and live car-free for at least one year. With a ceremonial pledge and a handing over of car keys, the celebrated figure commits to a year of human transport on the fully loaded commuter bike of their choosing. The crowd goes wild and the seed is planted: one inspired person on two wheels can make a difference in each of our communities.

Car-for-Bike Swappers are chosen after submitting an application describing why they are ready to give up their vehicle for the gift of two wheels.

Tour de Fat seeks to leave as small an environmental imprint as possible. Each stop has a solar-powered stage decked out in recycled materials and vendors who operate off the grid. In addition, the festival trucks and transport use biofuel sourced from recycled waste oils. Here is how you can do your part:

In 2012, Tour de Fat traveled to 15 cities, attracting a total of 74,400 festival attendees and 47,150 parade cyclists. In addition, the festival had an impressive 86 percent diversion of waste from landfills. Tempe, Ariz., raised the most money ($87,216) and New Belgium’s hometown of Ft. Collins, Colo., had the most parade riders and festivalgoers with 21,000 people.

Tour de Fat 2013 will cycle through each of the following cities*:

*additional schedule details will be released closer to the event.

New Belgium Brewing, makers of Fat Tire Amber Ale and a host of Belgian-inspired beers, is recognized as one of Outside Magazine’s Best Places to Work and one of the Wall Street Journal’s Best Small Businesses. The 100 percent employee owned brewery is a Platinum-level Bicycle Friendly Business as designated by the League of American Bicyclists, and one of World Blu’s most democratic U.S. businesses. In addition to Fat Tire, New Belgium brews eight year round beers; Ranger IPA, Rampant Imperial IPA, Shift Pale Lager, Sunshine Wheat, 1554 Black Ale, Blue Paddle Pilsener, Abbey Belgian Ale and Trippel.