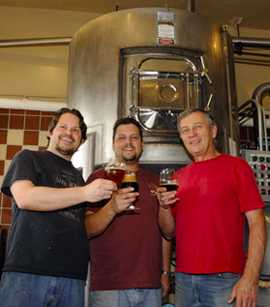 WARREN, Mich. — Kuhnhenn Brewing Company is expanding into a full-scale production and packaging facility, located at 36000 Groesbeck Hwy in Clinton Township, MI. The property formerly held a Home and Garden Center retailer, but has been vacant for several years.

The 35,000 square foot building will be divided into production, cellaring, packaging and cold storage, in addition to a tasting room and administrative offices. The brewery will feature a four-vessel, 38-barrel Huppmann brewhouse and enough fermentation tanks to allow for a projected capacity of nearly 20,000 bbls (1 bbl = 31 US Gallons).

Kuhnhenn has acquired a high-speed Krones bottling line for packaging beer for the sale to retail stores, while canning is also being considered. Production and distribution of Kuhnhenn Mead will also increase, thanks to the purchase of a 24-head Gea bottling line, specifically designed for packaging wine.

Distribution of keg and case product will initially focus on Southeast Michigan, with further penetration into the rest of the state within the first year. The focus will be on four year-round brands, three seasonals, and several limited release offerings.

“This is something we’ve been wanting to do for a number of years,” stated Eric Kuhnhenn, Partner and Brewmaster of Kuhnhenn Brewing Company. “It’s exciting to think that we’ll finally begin to make at least a short-term dent in the demand that has grown for our beer.”

“Furthermore, we are extremely excited to keep the production of our beers in Macomb County, which we all call home,” stated Bret Kuhnhenn. “We hope this will draw more attention to the growing beer scene in Metro-Detroit, and contribute to the economic rebirth in Macomb County.”

With the opening of the new facility, Kuhnhenn Brewing Company is expected to hire an additional 20-30 staff members, in both production and the tasting room. The facility is projected to be operational in the first quarter of 2014. The current Warren location will remain open, with a full line of beers, and focus on the production of small-batch experimental brews, as well as an increased barrel-aging program. A Small Distillers License is also being added at the Warren location, with more information to come.

While the beer market as a whole remains relatively stagnant in Michigan and throughout the US, sales of craft beer continue to grow at exponential rates. With this growth, wholesalers and retailers are taking notice.

“We find ourselves in a unique position,” stated Jon Piepenbrok, Director of Marketing and Sales for Kuhnhenn Brewing Company.

“We have built the brand and created demand for the beer; now we get to expand at a time and degree we feel comfortable. We’ve watched the industry expand with us and around us, all the while developing a plan for growth. Now we can make that jump.”

Bret and Eric Kuhnhenn began brewing their own beer in college. Kuhnhenn Brewing Company was founded in 1998, selling homebrew supplies out of the family hardware store. A Microbrewery License was granted in 2001, and the brothers began selling their beer by the pint and growler out of the Warren brewery. Their flagship, Loonie Kuhnie Pale Ale, continues to be the brewery’s best seller.

Kuhnhenn Brewing Company is consistently ranked in the top breweries in the world on beer rating websites Beer Advocate and RateBeer. They are known both for their high-gravity experimental beers, as well as their accurate interpretations of traditional styles.

The brewery has won countless awards at competitions across the world. In 2012 they were awarded a Gold Medal in the IPA category at the World Beer Cup for DRIPA (Double Rice IPA), the largest category entered and one typically dominated by large West Coast breweries. Kuhnhenn Braggot (a mead/beer hybrid) also took home a Bronze Medal in the 2012 Great American Beer Festival.

Kuhnhenn Brewing Company is a proud member of the Michigan Brewers Guild.