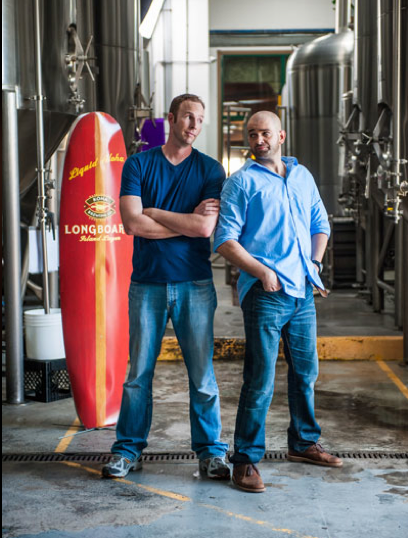 Kailua-Kona, Big Island of Hawaii — As professional brewers know, most people aren’t aware of the science, math and precision that go into making a successful batch of beer. Owner’s Manual, a new series premiering August 15 on AMC, will shed light on the intricacies of brewing, as well as other time-honored crafts including piloting a stunt plane and driving a locomotive.

“Episode 4: Brewery” will air August 29 and pits hosts Marcus Hunt and Ed Sanders against each other as they attempt to brew a batch of beer at Kona Brewing in Hawaii. Cameras are rolling and tensions are building as the two hosts differ in their approaches to learning new skills. Hunt, of HGTV’s Hammer Heads, always studies the Owner’s Manual for the project he’s about to undertake but, Sanders, a carpenter from ABC’s Extreme Makeover: Home Edition, likes to wing it. Recipe measurements are off, kettles boil over, and antics ensue, with the final result of their brewing prowess unveiled before a panel of judges and TV viewers in the 30-minute episode of Owner’s Manual on Thursday, August 29, 2013 at 10:30 PM ET/PT, 9:30 C, and 7:30 local time in Hawaii.

“The Kona Brewing episode is one of the network’s favorites, which is why they’ve scheduled it as one of the first to air,” said director Jerry McNutt. “I mean, filming with a backdrop as unique as Hawaii is one thing. But to be able to hang out behind the scenes at Kona Brewing for a week was incredible for our cast and crew. We were treated with much aloha, and we really learned to appreciate the brewers’ craft with the amount of education and patience that goes into brewing great Hawaiian beer.”

Owner’s Manual is produced by Asylum Entertainment (The Kennedys, Addicted, The Locator) with Steve Michaels, Jonathan Koch and Alex Piper as executive producers. All episodes, according to AMC, “will test one of the most common divides among man: Those who read the owner’s manual and those who do notÔÇªWith opposing points of view and conflicting methods of practice — one man works strictly from the rulebook, while the other uses only his instincts — the real test will be how this ‘everyman’ duo can collaborate to accomplish their challenge.”

Spoiler alert: In the Kona Brewing episode, the hosts do manage to pull off a batch of a brew they named “Nine Stings” as shown in the Twitter photo to the right. Is it drinkable? Tune in and find out how the brew got its name. Even better, you can have a taste of the Nine Stings Ale, as it will be on draught at the Kona Brewing Kailua-Kona pub and restaurant, with a viewing party to be held August 29 at 7:30 PM. The episode is set to run 11 times on AMC, with the full schedule published here. Kona’s portfolio of beers is available in 36 states and you can find out exactly where on Kona’s beerfinder.