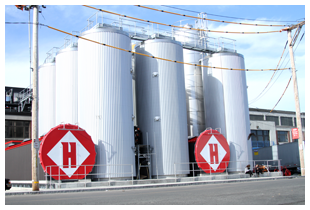 Boston, MA (July 10, 2014) — The Harpoon Brewery, brewers of Harpoon IPA and UFO beers, is proud to announce that effective August 1st it will become an employee-owned company. The existing shareholder group transferred 48% of Harpoon’s shares to an Employee Stock Ownership Plan (ESOP). This new structure of employee ownership will ensure the brewery’s independence and preserve Harpoon’s culture.

“Employee ownership is the embodiment of what Harpoon stands for,” says Harpoon co-founder Dan Kenary. “Our success as an independent craft brewer is attributed to our outstanding employees and the wonderful culture we have at the brewery. The ESOP strengthens our commitment to our employees, our culture, and to making and sharing great beer.”

The Harpoon Brewery was founded in 1986 on the Boston waterfront by Dan Kenary and Rich Doyle. It has since grown to be the 12th largest craft brewery in the US and currently has 187 full-time employees between its Boston, MA and Windsor, VT brewing facilities.

Doyle will step down as CEO but will maintain part-time status at the brewery, focusing on key marketing and sales initiatives as well as new business development. Kenary will assume the role of CEO. No other changes in the management structure will take place.

“This is a big transition for the company and for me, but it feels like the right thing at the right time. I have enjoyed my twenty-eight years working here and building a first class brewing company from idea to reality. The ESOP will really fit the culture here since Harpoon has always been a very team-oriented place. Dan and the Harpoon team will continue to do an excellent job.”

The announcement of the ESOP was made to Harpoon employees at a special mid-year meeting on the evening of July 9th.

For additional information about the Harpoon Brewery and the Harpoon ESOP, please contact Liz Melby at lmelby@harpoonbrewery.com.

The Harpoon Brewery was founded by beer lovers, Rich Doyle and Dan Kenary. In 1986 Harpoon was issued Brewing Permit #001 by the Commonwealth of Massachusetts, since it was the first brewery to brew commercially in Boston after a dormant period of about 25 years. Harpoon’s line of craft beer features its award winning IPA and UFO beers, along with special seasonal selections. In 2000 Harpoon purchased a second brewery in Windsor, VT, making Harpoon the 12th largest craft brewer in the US. Harpoon has since introduced the limited batch 100 Barrel Series and the as well as the all-natural Harpoon Craft Cider made from freshly–pressed, local apples. For more information about Harpoon beers and visiting the breweries, visit www.harpoonbrewery.com.