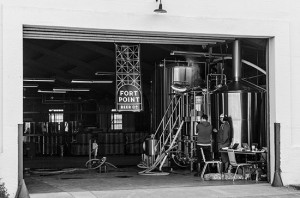 The Catalana brothers are no strangers to the brewing industry. They opened a restaurant and 3-barrel nanobrewery called Mill Valley Beerworks in 2010, which has been highly successful, but according to Justin Catalana, “For the last 4 years we’ve wanted to reach a larger audience. We have always loved the Presidio, and the historic buildings are a nice home for a brewery, both aesthetically and in terms of the spirit of our beers.”

Fort Point’s mission is to “create balanced, thoughtful beers, that reference traditional styles, but are by no means bound to them.” Mike Schnebeck has been enlisted to serve as Fort Point’s head brewer. He’s been working with the Catalana brothers since the opening of Mill Valley Beerworks.

The new brewery’s twenty-barrel system has already made a large variety of different beers. They include “KSA”, a traditional German K├Âlsch style ale, “Park”, a light and hoppy wheat beer, “Westfalia”, a homage to the Nuremberg Rotbier, “Villager,” a San Francisco style IPA that emphasizes hop aroma with mild bitterness, and “Tosca,” which is another K├Âlsch style ale made with Yerba Santa, created exclusively for Tosca Cafe in San Francisco.

Schnebeck has also been busy with a few collaborations. He worked with Sebastien Sauer of Freigeist to create a malty beer inspired by Fort Point’s Westfalia, made with charred manzanita, smoked malt and saphir hops. At the end of January Schnebeck also collaborated with European gypsy brewer Mikkeller.

Fort Point is currently delivering draft beer to bars and restaurants throughout the Bay Area. Their brewery does not include a tasting room or tours at this time, so follow them on Facebook and Twitter, or visit the Fort Point Beer website for more information.