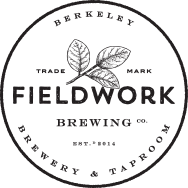 Berkeley, CA – Fieldwork™ Brewing Company today announced it will begin brewing and open its newly constructed taproom to the public in the first quarter of 2015. Located in a 10,212 square foot building at the corner of Sixth Street and Harrison Street, Fieldwork anchors a block in an area of West Berkeley currently undergoing steady urban revitalization. Fieldwork joins current neighbors Covenant Wines and Makers Workspace, with Urban Adamah soon breaking ground on its educational farm and community center.

“Berkeley was first on our list of potential locations for the brewery. The city is home to a fantastic community of award-winning craft breweries. We wanted to be part of that community, and we are grateful to the City of Berkeley for making us feel right at home,” said co-founder and owner Barry Braden.

The Fieldwork taproom will offer a warm, rustic environment for guests to enjoy a tasting flight or full glasses of Fieldwork brews. In addition to the brewery’s flagship offerings, the taproom will feature a rotating selection of seasonal, limited release and experimental recipe beers. Fieldwork’s friendly and knowledgeable taproom team will be available to talk all things beer and provide recommendations. The brewery and taproom will host beer-pairing dinners featuring local guest chefs, beer- and food-pairing seminars and scheduled tours. The taproom will also be available to reserve for private events.

Fieldwork brews will be available “to go” in 32 oz and 64 oz refillable Fieldwork growlers, and the taproom will fill clean, third-party growlers in accordance with California law. Fieldwork has partnered with local purveyor The Pie Shop in Oakland for a simple and savory menu of British-style meat, vegetable and vegan pies (“pasties”) made with fresh, locally sourced ingredients, available daily in the taproom.

Fieldwork taproom guests can choose from a large variety of games to play with friends or may grab a book to read from the Little Free Library™ kiosk, which encourages readers to “Take a Book, Leave a Book.”  Wi-fi will be available for guests looking to study or work with a beer close at hand, and the facility also provides indoor, secure storage for up to twenty bicycles.

The Fieldwork brewery consists of a three vessel, 20 barrel brewing system fabricated to the brewer’s specifications and 240 barrels of initial fermentation capacity. The company expects to produce over 2,000 barrels of beer in its first year of operation and will eventually brew over 15,000 barrels annually at the Berkeley location. Fieldwork will provide employment for six full time and ten part time personnel in its first year of operation.

Co-founder and owner Alex Tweet will lead brewing operations for the Company. Before founding Fieldwork Brewing Company, Alex was a brewer at Modern Times Beer in San Diego, a brewery that landed in RateBeer’s Top 10 New Brewers in the World after opening in 2013. Prior to Modern Times, Alex was a brewer at San Diego’s Ballast Point Brewing and Spirits, which was ranked #29 on the Top 50 Craft Breweries list published by the Brewer’s Association in 2013.

“Ballast Point and Modern Times are world-class breweries, and I learned to brew beer from some of the best brewers in the world. Working for these great companies enabled me to hone my craft and inspired the desire to do my own thing,” explained Tweet.

Tweet and the Fieldwork team will be brewing American and Belgian-style beers based on recipes he has created and perfected in pilot batches. The brewery’s initial lineup will consist of seven year round beers, four limited release, four seasonal release and four special release beers. Fieldwork is also planning an extensive barrel-aging and blending program with a focus on American sour ales.

Fieldwork Brewing Company is a craft brewery founded in Berkeley, CA with a focus on exceptional, honest beer-making. Fieldwork brews are served in its Berkeley taproom and at the finest craft beer focused establishments in northern California.

Pabst Brewing Company Redefines Itself as an Enhanced Drinks Business