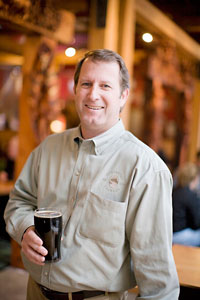 PORTLAND, OR – Last night, Deschutes Brewery founder and owner Gary Fish was awarded The Al and Pat Reser Civic Leadership Award at the 2012 Governors’ Gold Awards ceremony at the Oregon Convention Center. The award recognizes one individual each year who has shown a commitment to promoting quality of life in his or her community. Fish was chosen based on the recommendation of mayors from around the state who recognized his impactful support of local art, music, natural resources and more.

In 1988, Fish founded Deschutes Brewery, a regional craft brewery which has brew pubs located in Bend and Portland, and a main brewing facility operating in Bend’s Old Mill District to fill distribution in 19 states and two provinces. Deschutes Brewery ranks in the top five craft breweries nationally for growth and volume.

Under Fish’s direction, the brewery gives back $1 per barrel to charitable causes each year, equaling more than a quarter million dollars. A cross-departmental team of passionate individuals help to guide community giving for the company. Earlier this year, Deschutes Brewery pledged to return 1 billion gallons of water to the Deschutes River each year through the Deschutes River Conservancy — the organization’s largest donation to date.

A strong proponent of community involvement, Gary has served on many local and regional boards, been recognized for community service and business operations by the Oregon Restaurant Association, and was previously named as Bend Chamber Citizen of the Year. Fish founded the popular Sagebrush Classic event, which has raised $3 million for Central Oregon children and family charities over the past two decades.

The Governors’ Gold Awards is a private, invitation-only dinner event that is held each year to recognize individuals, companies, organizations and communities that have contributed to the “greatness” of Oregon. The event benefits the Special Olympics Oregon, an organization serving Special Olympics athletes statewide since 1972.