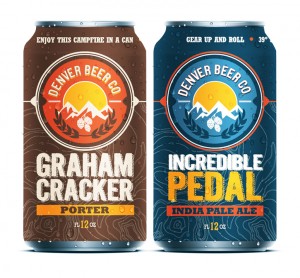 Denver, Colo. (April 30, 2014) — Denver Beer Co. today announced Graham Cracker Porter and Incredible Pedal IPA will be available in cans, year-round, beginning in July, 2014. Additional seasonal favorites will be introduced on a rolling schedule including Hey!Pumpkin in the fall of 2014, and a winter seasonal in late 2014. The brewery also released the can design for these first two varietals which will be sold at Denver-area liquor stores and on premises at both the Platte Street and Jason Street brewery locations.

The can designs for Graham Cracker Porter and Incredible Pedal IPA reflect Denver Beer Co.’s and its customers’ love for the great outdoors and adventure. Designed by Andrew Klein of Unleaded Group, each can features a longitudinal and latitudinal coordinate for a favorite spot in Colorado. Denver Beer Co. will announce details on the Denver Beer Co. Explorer Race, a scavenger hunt type of contest associated with these coordinates, in early summer.

“We expect folks to take these cans into the woods, on fishing and rafting trips, picnics, and to their favorite outdoor places,” stated Co-owner and Brewer, Charlie Berger. “We hope these beers become companions to all your Colorado adventures.”

“While working on the Denver Beer Co. can concept, I took cues from classic beer can design. I didn’t want to overdesign the cans as the beer quality should do the talking,” stated Andrew Klein, Creative Director for Unleaded Group. “I wanted to represent the Colorado lifestyle that both Denver Beer Co. and its customers love, and so the resulting can design features a topo map and retro patches for the background imagery, with a central focus on the Denver Beer Co. logo.”

The beer for the Denver Beer Co. canned offerings will be brewed at the new production brewing facility located at 4455 Jason Street in Denver, also known as “Canworks.” Canworks will focus primarily on canning and bottling beer for distribution. Additionally the facility will feature a small tap room, and host beer festivals and parties. Canworks houses a new thirty (30) barrel brew house and four (4) sixty (60) barrel fermenters and has an initial brewing capacity of 5,000 barrels per year.

Canworks will use existing Denver Beer Co. recipes and will continue the brewery’s tradition of brewing a variety of beers throughout the changing seasons. Offerings will include six-pack cans, seasonal mixed packs, and 22 oz. bombers of specialty batches. The canned and bottled offerings from Denver Beer Co. will be available in Denver area liquor stores starting in summer, 2014. Distribution will begin with Denver metro locations and will expand to stores throughout the Front Range and mountain towns. Denver Beer Co. plans to self-distribute canned and bottled brews. For more information, visit www.denverbeerco.com.

The idea behind Denver Beer Co is simple. Good beer is best enjoyed with friends, fresh air, and a bit of adventurous spirit to sharpen the palate. Our craft brewery specializes in artisan and seasonal varieties of premium ales and lagers made from the best ingredients around. Brewed with traditional methods and innovative spirit, our beer is always fresh and flavorful. Our beer is serious fun. www.denverbeerco.com