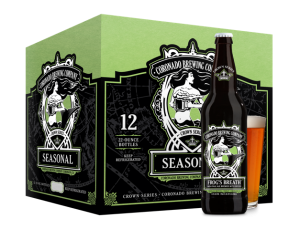 Coronado, CA — Coronado is known as America’s “Crown City,” and the California brewer’s Crown Series launches include favorites like Idiot IPA and Hoppy Daze Belgian style ale. This April, Coronado’s Crown Series Frog’s Breath IPA takes the place of spring seasonal Hoppy Daze on and off premise, now unfiltered with a 6.5% ABV. Frog’s Breath IPA has a bright citrus flavor derived from spices, kaffir lime leaf, lemon and orange zest. This unfiltered IPA was adapted from a home-brew recipe developed by two local Coronado homebrewers who are also retired Navy frogmen. Once the beer went on draught at the Coronado pub and restaurant, it was an immediate hit.

Where to find it:

In 1996, when craft beer was still a foreign term and San Diego County was home to only a handful of breweries, the Chapman brothers Ron and Rick opened a brewpub in their hometown of Coronado. CBC brews abundantly hoppy West Coast-style ales staying true to their San Diego roots. They began distributing their beers throughout the local market, and today you can find Coronado beers in 13 states across the US. In addition to their long established pub in Coronado, the company opened a tasting room inside their newly built San Diego production facility in early 2013.