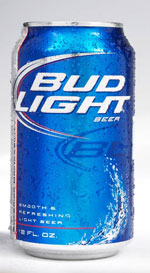 ST. LOUIS – As part of America Recycles Day, Bud Light is encouraging football fans across the United States to always recycle, whether tailgating before a game or enjoying the action at home. In order to help raise awareness for this important message, the Bud Light Recycling Zone, an interactive traveling display featuring a 21-foot tall football goal post constructed of crushed aluminum cans, is making a special stop in Los Angeles today with TV and film star Damon Wayans, Jr.

Wayans will be on-site at the Hollywood and Highland Center today, informing fans about the importance of recycling and challenging them to kick field goals through the aluminum uprights made from crushed cans at the Bud Light Recycling Zone.

The goal post is constructed of 102 aluminum bricks weighing approximately 37 pounds each. Each brick is equivalent to more than 1,200 12-ounce aluminum cans. The Bud Light Recycling Zone has made an appearance in nine NFL cities this season. As part of the program, Bud Light representatives toured the tailgate areas with a “six-pack of recycling bins” to collect empty containers from fans while they enjoyed pre-game festivals in cities like Kansas City, Detroit and Oakland.

“As the official beer sponsor of the NFL and one of the nation’s largest producers of aluminum cans, the Bud Light Recycling Zone was a fun way to keep recycling top-of-mind for football fans this season,” saidShana Ruffus, Environmental Outreach for Anheuser-Busch. “Giving adults a final chance to experience the Bud Light Recycling Zone on America Recycles Day is a great way to conclude a program dedicated to reminding adults about the power of recycling.”

Recycling is a key part of Bud Light’s Good Sport program, which also encourages fans to be respectful of others, to drink responsibly and to use a designated driver. Bud Light is an official sponsor of America Recycles Day and Keep America Beautiful, Inc., a volunteer-based organization that engages individuals to take greater responsibility for improving their community’s environment.