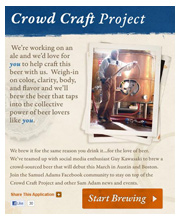 BOSTON – The Samuel Adams brewers are teaming up with social media enthusiast, Guy Kawasaki, for the first ever Samuel Adams Crowd Craft Project to create a crowd-sourced beer. Via an interactive Facebook application, Samuel Adams and Guy are calling on their Twitter, Facebook and Google+ friends and fans — not to mention all beer lovers — to weigh in on aspects of a beer from color and clarity to the flavor profile.

Beer is social and history shows that many great ideas have been formed over a good beer. Through this program, Samuel Adams and Guy Kawasaki are looking to take this experience online. Guy has the same passion for social media and inspiring innovation that Samuel Adams has for high quality craft beer. From his experience, he’s seen great ideas born from mass conversations, and it’s this type of collective imagination that will make this social collaboration brew a standout.

What Brewer Bert B. and Guy K. have to say:

“I think it’s still up in the air as to which is the better social networking tool — Facebook or beer,” says Bert Boyce, Samuel Adams Brewer. “My love of beer is something I share with the Samuel Adams drinkers — I’m sure that their choices will collectively create a great tasting brew. We can’t wait to see what they come up with!”

“I’m a total believer in crowd-sourcing. It brings great minds together that might not collaborate otherwise. The Samuel Adams Crowd Craft Project is exciting because it’s not only asking for input, but its educating people about what it takes to make a great beer. These brewers are extremely passionate about crafting something special and we are all going to help them do it,” says Guy Kawasaki, former chief evangelist of Apple and New York Times best-selling author.

Boston Beer began in ‘84 with a recipe Founder and Brewer Jim Koch found in his father’s attic. The company now brews over 30 craft brews. www.samueladams.com