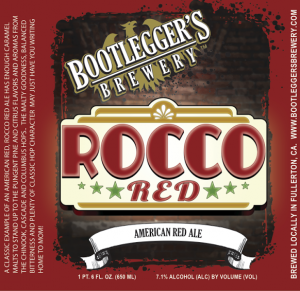 Rocco Red is an American Red Ale that has been enjoyed at our Fullerton, CA tasting room for a few years now. It has satisfied those who like a beautiful, full bodied ale that many consider to be perfectly balanced with rich malts and American hops.

Bootlegger’s Rocco Red is available now, at finer craft beer stores in our distribution footprint, as well as Bootlegger’s Tasting Room and Pilot Brewery at 130 S. Highland Ave in Fullerton.

Established in 2008 by husband and wife Aaron and Patricia Barkenhagen, Bootlegger’s Brewery is one of the pioneering breweries in the emerging craft beer scene of Orange County California. Bootlegger’s makes a diverse portfolio ales and lagers with love and hard work, for the hard working man and woman. Learn more about Bootlegger’s Brewery by visiting http://bootleggersbrewery.com, and follow Bootlegger’s on Twitter, Facebook and Instagram.