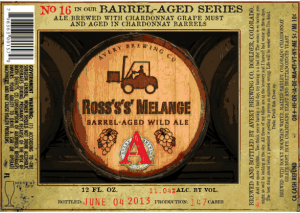 BOULDER, Colo. — When it rains, it pours! Another barrel-aged beauty is ready to be poured! Ross’s’s Melange, No. 16 in the Barrel-Aged Series, is an 11.04% ABV wild ale brewed with Chardonnay grape must and aged in first use Chardonnay barrels for 6 months.

Brewed with both Brettanomyces and Champagne yeast, the beer is as wild and funky as the man who inspired it.

“This beer has a huge white wine influence and aromas of fresh pear juice. It has some nice tannic notes from the oak and is very dry, definitely Champagne-esque. This is an incredible beer to pair with food,” said Avery Chief Barrel-Herder Andy Parker.

Bottle sales will start at 4pm on Sunday June 16th, Fathers Day, at the Avery Tap Room, 5757 Arapahoe Ave. in Boulder, Colo. CASH ONLY, $10 per 12oz bottle, and limit of 12 bottles per person. Only 147 cases exist, so hop in line early to make sure you get your shot at this awesome beer!