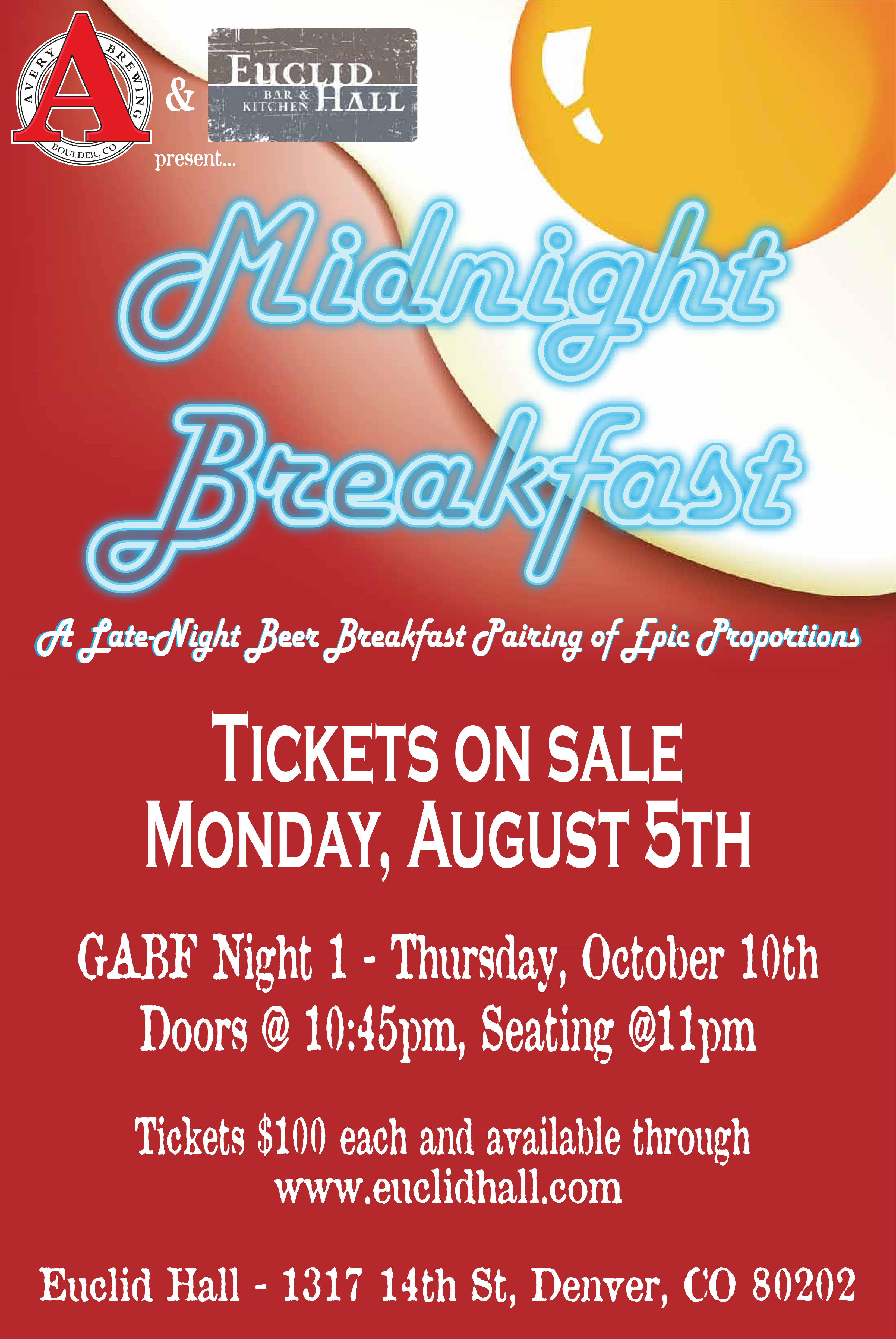 DENVER, CO — Avery Brewing Company and Euclid Hall Bar & Kitchen are welcoming Great American Beer Festival attendees in great American style for the third year with Midnight Breakfast at Euclid Hall right after the first GABF session on Thursday, October 10th. The doors at Euclid Hall open at 10:45 and the breakfast gets underway at 11:00 p.m. Tickets for this legendary late night beer breakfast are $100 per person and go on sale on Monday, August 5th at www.brownpapertickets.com.

Billed as a late night beer breakfast of epic proportions, Euclid Hall chef Jorel Pierce and the brewers of Avery Brewing Co. have conspired to create a nine-course sit-down breakfast. Look for rare Avery brews like Ross’s’s’ Melange, Momi Hiwa, Bad Apple, Tweak and the unreleased Thensaurum, a sour ale aged in rum barrels. Avery is pulling out all the stops to present one of the most exclusive beer menus that it will offer anywhere this year.

“We decided to change it up a bit this year and do a sit-down breakfast,” said Pierce. “Everyone has been on their feet all night and they can relax and enjoy the meal.”

“This is one of my favorite events of the year,” said Darin McGregor, National Marketing Director for Avery. “We love to push boundaries and get crazy so it’s great to stretch out and see what’s possible with a whacked out creative genius like Chef Jorel. We want to blow some minds. That’s exactly what I need after the first session of the GABF.”

Euclid Hall Bar & Kitchen opened in early August, 2010 at 1317 14th Street in Denver’s Historic Larimer Square, the third restaurant from the team of Jennifer Jasinski and Beth Gruitch, owners of the award winning Rioja and Bistro Vend├┤me. Located in Euclid Hall, an 1883 building that once housed the venerable Soapy Smith’s bar, this American tavern is focused on high quality and innovative pub food from around the world including housemade sausages, po’ boys, poutine and schnitzels. An extensive craft beer selection and creative cocktails drive the beverage program. Call 303.595.4255 or visit euclidhall.com for more details.