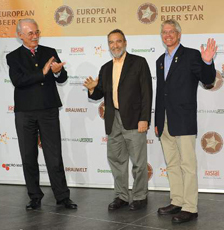 BOULDER, CO – Competing on the world stage, 21 American craft breweries, all members of the Brewers Association’s Export Development Program, won 35 awards in 22 different categories at The European Beer Star awards, one of the most recognized beer competitions in the world. The honors were announced on November 14 at Brau Beviale in Nuremberg, Germany.

The competition is limited to beer categories that originated in Europe. Awards are given for authentic, distinctive beers of impressive taste and quality that fulfill the criteria of the particular style in the best way possible. Beers are evaluated on the basis of purely sensory criteria and gold, silver and bronze medals are awarded in every category.

“I’m very honored and humbled to be among all these great brewers with all this tremendous heritage,” said Gary Fish, president of Deschutes Brewery, Bend, Oregon. “Normally, to win anything is awesome, but here is incredible.”

“It is a great honor to be recognized by the judges of the European Beer Star for beers with big American hop character. This competition brings in some of the very best brewers in the world and is judged by a heavily weighted European panel of experts,” said Matthew Brynildson, brewmaster, Firestone Walker Brewery, Paso Robles, California. “Our collective results send out a strong message that our beers are world class and changing the way the rest of the brewing community is thinking about better beer. The interest in American brewing and American hops is at an all time high and professional judges are awarding these beers top honors.”

“Small and independent American craft brewers are making the best beers in the world and we congratulate them for being recognized for that,” said Bob Pease, chief operating officer, Brewers Association. “Craft brewers are producing innovative and high-quality beers in the U.S. and showcasing them abroad, which is translating into a growth of sales for the country’s craft brewers.”

A complete list of the American craft beer winners at the 2012 European Beer Star Awards is available for download.