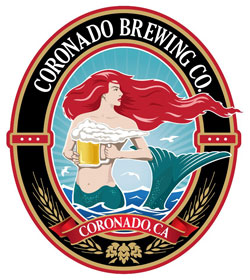 “The dedication of Ron and Rick Chapman is evident in the quality of Coronado’s beers and I look forward to spotlighting them even more at Philly Beer Week events,” said Grant Barrett, Origlio’s vice president of sales and marketing. “Now Philly beer drinkers can taste why they won the Champion Mid-Size Brewery & Brewmaster Award at the 2014 World Beer Cup awards only a month ago.”

Coronado Brewing will be visiting Philadelphia for the following launch events:

“It’s very exciting to be part of the 6th Annual Philly Beer Week,” said Rick Chapman, Coronado’s president. “We have a lot of great events lined up, and we’re looking forward to sharing a brew with some new Philly friends.”

About Coronado Brewing Company:
In 1996, when craft beer was still a foreign term and San Diego County was home to only a handful of breweries, the Chapman brothers Ron and Rick opened a brewpub in their hometown of Coronado. CBC brews abundantly hoppy West Coast-style ales staying true to their San Diego roots. They began distributing their beers throughout the local market, and today you can find Coronado beers in 17 states across the US. In addition to their long established pub in Coronado, the company opened a tasting room inside their newly built San Diego production facility in early 2013.

Founded by Antonio Origlio in 1933, Origlio Beverage’s mission is, and always has been, to bring outstanding domestic, imported, craft and micro-brewed beers to the Delaware Valley. With an ever-growing portfolio, we will continue to bring the best of the beer world to the Philadelphia five-county area.