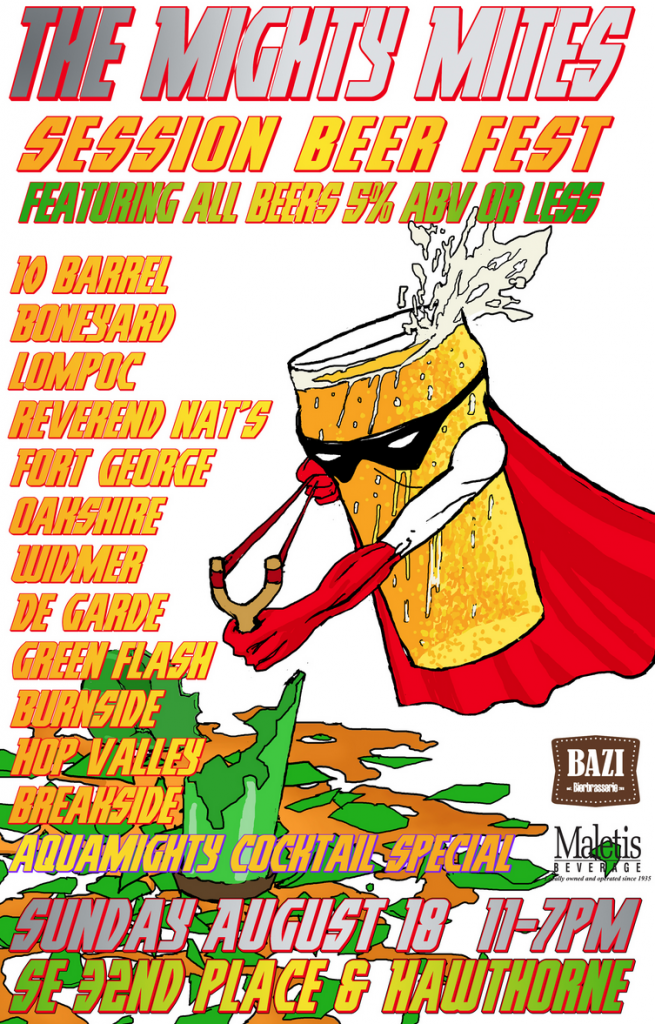 PORTLAND, Ore. — In a world full of Double IPA’s and Imperial Stouts a hero will rise to stand up for the small, lighter, sessionable beers of equal flavor and tastiness.

Faster and tastier than a can of Silver Bullet, The Mighty Mites session beer fest is back for a sequel on Sunday August 18th as part of the Hawthorne Street Fair in front of famed bier bar Bazi Bierbrasserie.

Featuring beers that fall under the “Session” style category as defined by being 5% abv or below The Mighty Mites presents a selection as varied as they are flavorful from single hopped IPA’s to tart refreshing Berliner-Weisse’s and Lagers and even a session Cider our taplist has multiple Great American Beer Fest medal winning beers. These types of beers are perfect for quaffing multiple pints without filling yourself up or over indulging in alcohol and the Mighty Mites street party will make for a perfect summer respite as part of the Hawthorne Street Fair. As part of the annual fair The Mighty Mites will be the only beer garden on the street and the only full street closure on 32nd place just off Hawthorne marking the west side of where the street fair begins.

The Mighty Mites in collaboration with Bazi Bierbrasserie will be a family friendly event with ice cream from Salt & Straw, a Hot Dog cart and the Timbers No Pity Van. At the bar Bazi has created a special (non-sessionable) beer cocktail for the occasion dubbed the Aquamighty for $7, it contains Aquavit vodka, Hoegaarden, orange juice, demarara syrup, tiki bitters, served on the rocks with an orange zest. There will also be a full menu available inside Bazi.

Entrance to The Mighty Mites beer garden is $10 and includes a cup and 4 tickets, each ticket is good for a half pour of any session beer outside. Additional tickets cost $2 a piece and you can get a full pour of any beer for only 2 tickets. Only $4 per beer!

The process of making Ciderkin dates back to pre-Colonial times. After pressing apples once, the dry pulp is wetted and repressed the following day. We’ve taken the resulting small cider and added citrus zest blend to it as well as a hint of ginger, and back sweetened with honey. Under 4% ABV.

Brewed with Pale and Pilsner malts, this single hop Northwest blonde ale is crisp and refreshing with a mild hop character. This rotating hop series is totally poundable and was made for those days that you’re in it to win it!

A sessionable, hoppy ale brewed to showcase the floral, tea-leaf flavor and aroma of the Perle hop. At 4.8% ABV and 50 IBUs, this deep orange colored IPA is highly quaffable. The minty bitterness is balanced by pale, munich, and vienna malts with a touch of medium crystal. Dry hopping with 12 pounds of whole leaf Perle adds additional layers of grassy and floral hop complexity.

Pale gold Session IPA is brewed with high quality Marris Otter and Vienna Malt but the flavor is dominated by the Citra hop. 100% Citra hop is used to bitter and flavor the brew with additional Citra in the dry hop for aroma intensity. Citrus notes of lemon, orange and grapefruit are the main traits of the hop with light floral and lemon grass undertones. The abv at only 4.5% makes this hop laden brew an easily sessionable quaffer. 4.5% ABV, 45 IBU

Light in color, crisp, and ready for summer, Cali Pale Ale had beer enthusiasts and casual drinkers alike requesting bottle availability. Cali Pale Ale’s use of aromatic dry hopping with Simcoe and Citra hops leads to floral notes of citrus and tropical fruits. At 4.8% and 38 IBUs, Cali Pale Ale is the beer of summer.

Lompoc’s tribute to American domestics. Brewed with Pilsner malt and 30% flaked rice, the result is a pale straw colored beer that is highly drinkable and perfect for summer in the Northwest. 4.5% ABV

Grapefruit infused Berliner-Weisse with soda added. More beer and less soda than the traditional radler makes for a great summer beer. 4.5% and 13 IBU’s.

Berliner Weisse is a sour, tart, fruity, effervescent ale, often referred to as the champagne of beers for its light and sparkly texture. A little different but we like differentÔÇª give it a run for yourself. ABV: 4% IBU: 16

The name of this beer is befitting, shall we call it a vegetable beer or fruit ale. Either way this particular brew is made with 50 lbs of beets, 4 lbs of Blood orange puree, and just enough Citra hops to make this beer pleasantly layered. First the bitterness hits the palate then the under lying earthy beet flavor, that then develops into that amazing citrus burst. This beer cannot be described as fitting any one category of beer but is easy drinking and fun to look at. The Devil’s Advocate pours a deep rose color almost magenta with a bright pink head. The aroma is fulfilling, as is the brew to drink. 4.35%

Portlander Weisse is brewed in the spirit of the original Berliner Weisse. Its simple grain bill and low alcohol content are meant to keep with tradition and result in an extremely drinkable ale. Using a souring process in the kettle, this unfiltered brew has an intense tart quality, but ends with an extremely refreshing, crisp, dry finish. Try it with one of the flavoring syrups, which also keep with the tradition of this age-old beer. 3.4% ABV, 6 IBU’s. Peach ginger syrup or a blackberry coriander syrup available for mixing.

A crisp and refreshing American lager. 4.8%

A rich and full bodied English-style brown ale using chocolate, caramel, and English mild malts. For fans of our Scottish 70 and Mild, this beer is for you! SILVER MEDAL, 2012 GREAT AMERICAN BEER FESTIVAL, ENGLISH-STYLE MILD ALE
4.0% ABV 14 IBU
About The Mighty Mites

Founded by Jeff Alworth of the local Beervana blog in 2011 out of a desire for more low alcohol beers. Alworth originally conceived of the festival with publican Jesse Cornett at the time of The Guild public house, the fest was later relocated and held during the first annual Portland Beer Week in August of 2011. The festival was met with praise from both the critics and beer drinkers but was not brought back in 2012.

If Monks lived in Portland, this would be their watering hole. Bazi is located in the heart of Hawthorne, just south on SE 32nd Ave. A full service bar, Bazi brings centuries of brewing expertise under one roof by pouring domestic and imported Belgian craft beers. Wine and a premium liquor selection compliment many along with signature cocktails. The food menu blends a heritage influenced by the French, Dutch and German. Just like the European tradition, Bazi embraces all local sport teams and encourages enthusiasts to gather together to cheer for your local team on a 114” HDTV!