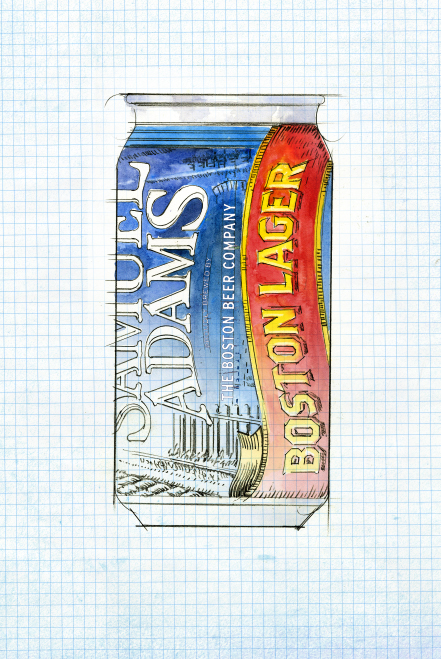 BOSTON (February 19, 2013) — Samuel Adams announced today that for the first time it plans to offer Samuel Adams Boston Lager in a can — but not just any can. The new can design — the result of two years of ergonomic and sensory research and testing — aims to provide a drinking experience that is closer to the taste and comfort of drinking beer from a glass. The “Sam Can,” as the brewers call it, will hit shelves in early summer 2013, just in time for drinking occasions that call for the convenience of a can such as sporting events, boating or the beach.

“The debate over bottles vs. cans has been a sticking point for brewers in the craft beer community for years,” says Jim Koch, founder and brewer of Samuel Adams. “In the past, I had my doubts about putting Sam Adams in a can because I wasn’t convinced that Boston Lager would taste as good as it does from a bottle. But cans have changed. And I believe we’ve designed a can that provides a slight but noticeably better drinking experience than the standard beer can.”

Koch and the other brewers at Samuel Adams first worked with can manufacturer Ball Corporation to understand can design, technology, and how to package premium beer in cans. The brewers then worked with a design team at IDEO, a recognized global design firm, and finally enlisted the help of sensory expert, Roy Desrochers of GEI Consultants. Desrochers, a recognized beer flavor expert for the Master Brewer’s Association of the Americas (MBAA), has provided counsel to the brewing industry for almost three decades. With Desrochers’ help, Koch studied every aspect of the new can, from how it could potentially impact the flavor of Samuel Adam’s flagship Boston Lager to the ergonomics of how the beer flows from the can and hits the taste receptors on a drinker’s tongue.

“I worked with Jim and the other brewers at Sam Adams on an ergonomic and flavor study to understand the benefits of the new can,” says Desrochers. “The flared lip and wider top of the new Sam Can work in concert to deliver the beer in a way that makes the flavor closer to drinking out of a glass. Although subtle, this can delivers a more pronounced, more balanced flavor experience — something that was very important to the brewers. The extended lip of the can also creates a smoother, more comfortable overall drinking experience.”

The difference in drinking out of the new can as compared to a standard can will be modest, but drinkers should notice enhanced flavors and a more comfortable experience. The position of the can opening and wider lid, naturally opens up the mouth allowing for more air flow and positions the drinker’s nose closer to the hop aromas of the beer. A little known fact is that most of what we think we taste is actually what we smell — that’s why it’s hard to taste food with a stuffed up nose. Drinkers also noticed that the extended, curved lip of the can delivered the beer to the front of the palate to maximize the early enjoyment of the malt sweetness.

Koch’s end goal in developing a new can is to provide drinkers with the best possible Boston Lager drinking experience when they prefer the convenience of a can, like on the golf course or at the beach, without compromising the taste of his first and favorite beer, Samuel Adams Boston Lager. Celebrating the flavors and ingredients in Boston Lager is what also led to the development of the Samuel Adams Boston Lager Pint Glass in 2007, also the result of a lengthy research project to enhance the beer drinking experience.

“The new Sam Can required a million dollar investment in special equipment tooling along with time, research and testing. This new can will also cost more than the standard can to produce. It may seem a little crazy to make that kind of investment, but we felt the slight improvement in the drinking experience was worth the expense. We made decisions based on the beer, not on the bottom line,” Koch explains. “We’ve done tastings here at the brewery, with Sam Adams drinkers and our experts, “and now, we’re proud to launch Samuel Adams Boston Lager in cans. We have a vessel that gives our drinkers the best tasting Samuel Adams in a can.”

Among the many advantages of cans is that drinkers prefer cans in certain circumstances where bottles are often not allowed or convenient, such as beaches, parks, pools, sporting events, boats and airplanes. Samuel Adams Boston Lager in cans will be available in 12-packs nationwide beginning early summer, for a suggested retail price of $14.99-17.99 (price varies by market).

The Boston Beer Company began in 1984 with a generations-old family recipe that Founder and Brewer Jim Koch uncovered in his father’s attic. Inspired and unafraid to challenge conventional thinking about beer, Jim brought the recipe to life in his kitchen. Pleased with the results of his work, Jim decided to sample his beer with bars in Boston in the hopes that drinkers would appreciate the complex, full-flavored beer he brewed fresh in America. That beer was aptly named Samuel Adams Boston Lager┬«, in recognition of one of our nation’s great founding fathers, a man of independent mind and spirit. Little did Jim know at the time, Samuel Adams Boston Lager soon became a catalyst of the American craft beer revolution.

Today, The Boston Beer Company brews more than 50 styles of beer. It relentlessly pursues the development of new styles and the perfection of classic beers by searching the world for the finest ingredients. Using the traditional four vessel brewing process, the Company often takes extra steps like dry-hopping, barrel-aging and a secondary fermentation known as krausening. The Company has also pioneered another revolution, the ‘extreme beer’ movement, where it seeks to challenge drinker’s perceptions of what beer can be. The Boston Beer Company has been committed to elevating the image of American craft beer by entering festivals and competitions around the globe, and in the past five years has won more awards in international beer competitions than any other brewery in the world. As an independent company, brewing quality beer remains its single focus. Although Samuel Adams beer is America’s largest-selling craft beer, it accounts for only one percent of the U.S. beer market. The Boston Beer Company will continue its independently-minded quest to brew great beer and to advocate for the growth of craft beer across America. For more information, please visit www.samueladams.com