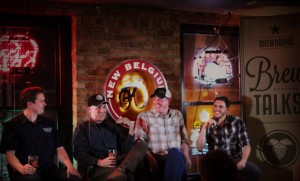 While brewers routinely tout beer quality as their chief concern, distributors can play an equally influential role in developing a brand’s future. Finding the right wholesaler match and identifying niche markets can elevate a brewery from a local favorite to a national powerhouse.

The interview panel served as the latest edition of Brewbound’s Brew Talks, an ongoing series of educational and networking events for craft brewers and industry professionals.

Stoub, Kahle and Wulff agreed that quality remains one of the most important parts of selling beer, and with that quality comes freshness.

“Send the freshest beer you can to the distributor,” Wulff said.

He added that a brewer often has one chance to impress a group of experienced beer tasters, and beer freshness will ensure your brewery a fair shot at consideration for distribution.

“The first time it doesn’t taste good, they’re going to turn away from the brand,” Stoub said of consumers.

Kahle said that when he goes to a liquor store, he often leaves with a case of beer that he didn’t expect to buy. This is because he favors the freshness of beer, typically brewed within the past two months, over any brand or style, and truly fresh beer has become harder to find. And Kahle certainly knows how to pick out a fresh craft brew. He’s one of only seven Master Cicerones in the world, a certification earned by passing a series of rigorous tests on beer styles and quality.

Oskar Blues, a brand that boasts flavor and freshness, places a drink-by date at the bottom of its cans. Wulff said that this is a way to be upfront with consumers about what many, like Kahle, consider to be an integral part of the beer-drinking experience.

But aside from quality and freshness, Kahle said that Wirtz Beverage is most interested in working with breweries that understand their identity. Part of that means having a strategic business plan and a go-to market approach with long-term goals in mind. Beyond that, Kahle said he looks for breweries that are easy to work with and practice good morals. With the profileration of craft breweries across the country, he argued that these qualities are nearly required to survive.

“You can’t just be good, you have to be exceptional,” Kahle said.

Wulff agreed and explained that during his time with Windy City, he wasn’t looking to collect brands. Instead, Windy City was looking to fit a niche in the market and limit brand and style overlap within the current portfolio. Chicago has morphed into one of these core, niche regions, he said.

Like other major, metropolitan markets, Chicago boasts a significant amount of beer drinkers. And while geography and beer history have allowed domestic breweries from Milwaukee and St. Louis to dominate here, sales representatives like Stoub and Wulff are aiming to tilt the market more toward craft beer.

Another part of Chicago’s affinity for domestic beer stems from the fact that there no prominent, locally-owned craft breweries. (Goose Island, which had long been the area’s largest craft brewery, was acquired by Anheuser-Busch InBev in 2011.) The lack of a well-established craft brand in Chicago has led to some ‘pay-to-play’ tactics. Large brewers looking to earn on-premise placement will sometimes incentivize bar owners by offering free kegs — or even cash — in an effort to stay on tap. Kahle said that while the pay-to-play system isn’t ideal, it’s hard to avoid for the craft beer industry, which has only recently gone mainstream. He said that it would be tremendous if all beer distributors congregated and agreed to refuse all pay-to-play offers, however the reality is that this strategy will continue to exist until craft beer seizes a greater share of the overall beer market.

“The light is on and burning brightly for the masses right now,” Wulff said. “We’ve got to educate them.”

Breakthru Beverage Group to Sell Beer and Cider Portfolio in...